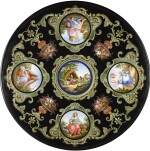 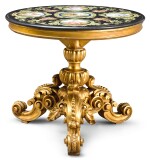 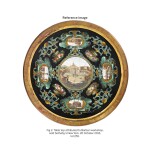 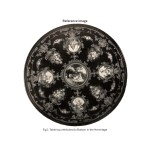 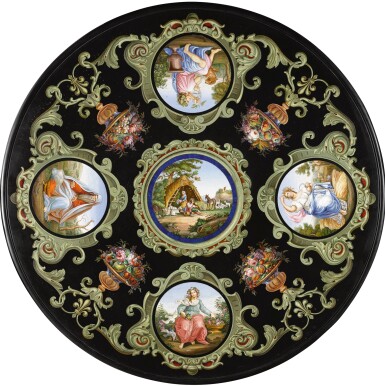 with micromosaic inlays consisting of five circular scenes portraying classical figures with attributes of the seasons, all within green scrolling cartouches connected with alternating depictions of vases of flowers and fruit, the central scene, within a lapis lazuli border showing a peasant couple in front of a hut surrounded by farm animals, on a associated carved giltwood tripod base

In overall good condition. The top with minor old marks and scratches consistent with age and use. Some losses refilled. The base with minor losses to gilding and chipping to edges. Three breaks to the base’s top have been repaired. Ready to place.

A. González-Palacios, and Steffi Röttgen with essays by Steffi Röttgen, Claudia Przyborowski; essays and new catalogue material translated by Alla Theodora Hall, The Art of Mosaics: Selections from the Gilbert Collection, Los Angeles, 1982, cat. no. 98, pp.202-203.

The quality and originality of this table can only be compared to the technical virtuosity of the Roman mosaicists of the 19th century Michelangelo Barberi (1787-1867) and his workshop. Barberi was the premier artist of micromosaics during the peak of the art form in 19th century Europe as he took the art form to a whole new level. He gained international recognition and fame for the originality of his compositions and his masterful execution of micromosaics. His genius was in his ability to paint with individually shaped coloured tesserae resulting in astonishing pictorial masterpieces.

His father was a successful architect with close ties to the designer G. B. Piranesi, and his brother were painters. Barberi was therefore surrounded by different kinds of art forms from a young age. His skills in composition and drawing indicate that he must have received formal or informal art training during his youth. Around 1820, Barberi was notably an apprentice of the master mosaicist Cesare Aguatti of the Vatican Mosaic Workshop. In 1823, still early in his career, Barberi who was made Cavaliere (the equivalent of knighthood) completed what is probably his most famous work: a tabletop called Trionfo d'Amore, based on a description in Petrarch's literary work of the same title, now in the collections of the Hermitage. Barberi's mosaics reflected the ideals of the Neoclassical movement, emphasizing secular designs based on antiquity and classical literature. His compositions are filled with a classical repertoire of elements such as trophies, wreaths, medallions, imperial eagles, allegories, portrait medallions and mythological subjects.

In 1856 Barberi published a book of some important pieces he had sold, Alcuni Musaici Usciti Dallo Studio del Cav. Michel'Angelo Barberi [Roma, Tipografia Tiberina, 1856]. In particular, Barberi’s design ‘Bacile del Cinquecento’ for a tabletop dated from 1842 made for the Duke of Bracciano is of great interest to us (ill. J. H. Gabriel, op.cit, p.282.). The composition is similar as the present example, a subject in the centre surrounded by cartouches.

The present table may be further associated with Barberi due to two important comparisons:

- the first table top is attributed to the workshop of Barberi and is illustrated in Efimova, op.cit., no.75, p.105 - fig.1. The table depicts Remus and Romulus at the centre, thus making a direct connection with Barberi’s ‘Bacile del Cinquecento’. This scene is surrounded by four cartouches with the Four Seasons and vases with fruit and flowers as well as scrolls intended as imitations of gilt-bronze, just like the present table. The Four seasons are personified by figures with their attributes: Autumn represented by a young man holding wine grapes; Summer with a woman with wheat in her hair; Spring with a woman seated with flowers, fruits and doves, and Winter with an old man wearing a cloak and holding his hands to a fire.

- a table top dated from 1864 sold Sotheby’s New York, 30 October 2013, lot 255 ($131,000) - fig.2. This table top is the first known micromosaic to be signed by a woman mosaicist, Virginia Valentini Nobili. Jeanette Gabriel writes ‘it is possible that Virginia Valentini Nobili was trained by the Barberis, worked in their studio and received their endorsement to sign her work.’ Again, the design of the top takes after Barberi’s drawing: a central scene, here depicting the Vatican, is surrounded by alternating cartouches with Roman landmarks and vases of fruit and flowers.

While the borders of these table tops resemble one another, the central scene differs. The present table top presents a shepherd and shepherdess surrounded by cartouches featuring the Four Seasons alternating with vases and bouquets of flowers. This scene is copied after the Milanese painter and engraver Francesco Londonio (1723-1783), whose prints were often translated in micromosaics. Londonio’s depiction of the farmyard scene includes a man and woman plus a greater number and variety of animals: a donkey, sheep, goats, chickens and a dog, now at the Teylers Museum (inv. no. TvB G 3802).

Today, the works by Barberi and his workshop are spread across public and private collections. Five tabletops are at the Hermitage: Triumph of Cupid, Twenty-four Hours in Rome, Monuments of Rome, Beautiful Sky of Italy, and a small version of Day in Rome. (Efimova, op.cit., figs. 68-73). The Gilbert Collection at the Victoria and Albert Museum in London includes four Barberi tabletops: Beautiful Sky of Italy, Chronological Rome, Flora of Two Sicilies, and Rome by Night and Day. Another signed version of Chronological Rome was sold at auction in New York in May 2011 (Christie's, New York, 19-20 October 2011, lot 21).