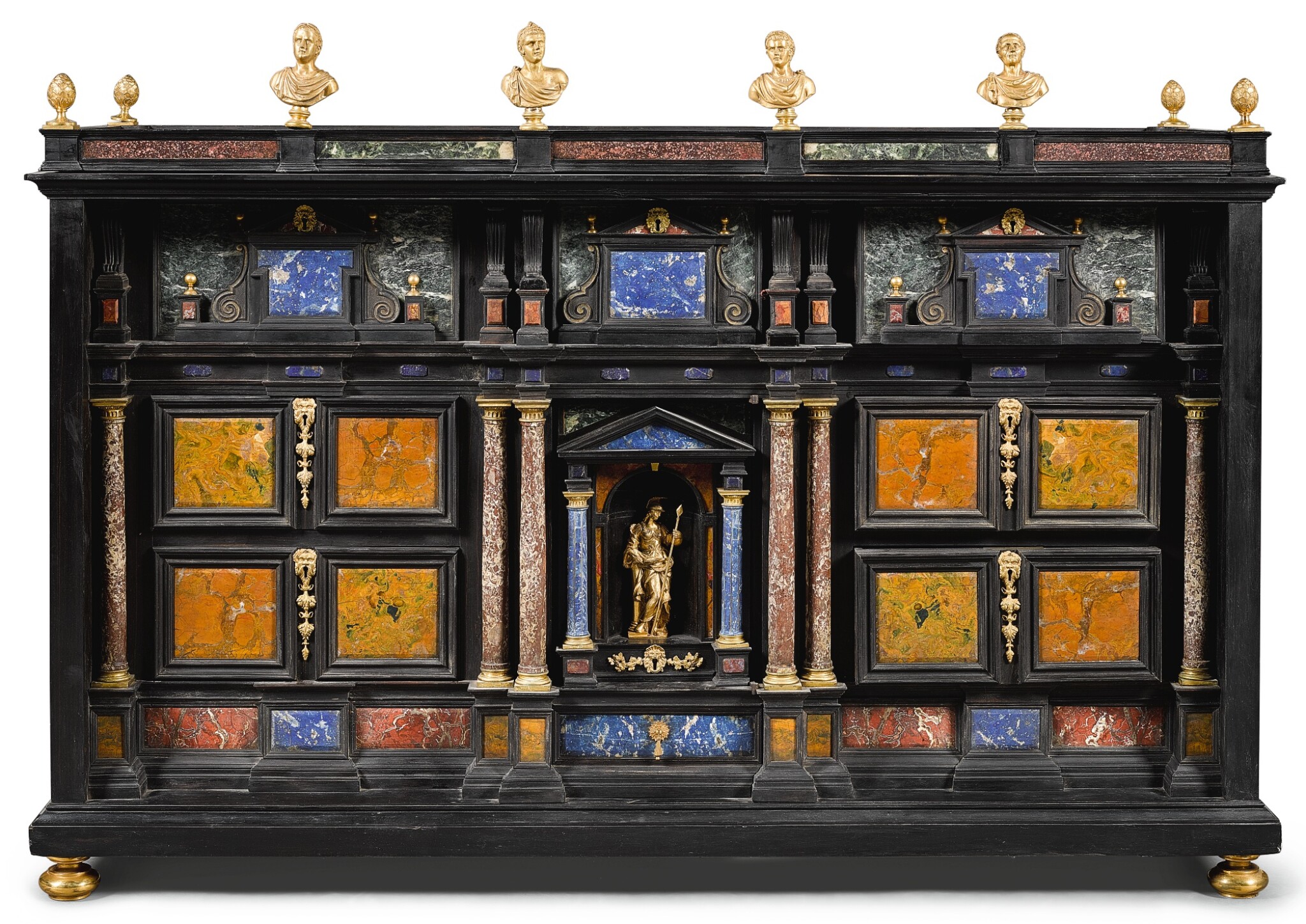 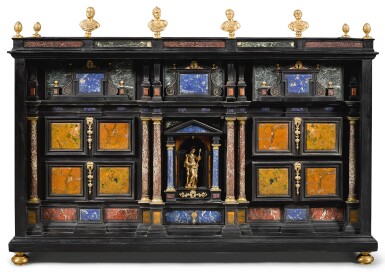 One small loss to moulding to top right of right side. Back left finial would benefit from being securely re-attached. One chip to bottom right of left side.

The front with some minor losses to gilding throughout.

Top right: The top right with one small loss to the moulding at the tip of the scroll. One detached moulding to the left of the orange jasper inset on the top right.

Top left: some minor chipping to corners of orange jasper inset. One minor section to lapis lazuli replaced to one column.

Generally with minor scratches and very minor cracks to panels and veneer surface.

The handles of the central niche drawers have ivory. Due to recent changes in the laws of many countries (e.g. US, France) Sotheby’s recommends that buyers check with their own government regarding any importation requirements prior to placing a bid. Please note that Sotheby’s will not assist buyers with the shipment of this lot into the US. A buyer’s inability to export or import these lots cannot justify a delay in payment or sale cancellation.

Working in the Renaissance Revival manner specialising in marquetry and inlay details, Giovanni Battista Gatti (1816-1889) and his Italian contemporaries helped to establish this style as a dominant aesthetic force in the 1860's and 1870's. Gatti was born in Florence where he became apprenticed to the brothers Luigi and Angelo Falcini who specialised in marquetry. Having studied in Rome and Florence, he worked as a journey-man cabinet-maker before establishing his own workshop at Faenza in the 1870's.

He enjoyed the support of imperial, aristocratic and ecclesiastical patrons in Europe including the Austrian Emperor, the Duke of Hamilton and Cardinal Amant, and was also popular amongst American industrial collectors such as Wright E. Post and William Gilstrap. Examples of his work are found not only in the Victorian and Albert Museum, but also in the Nelson-Atkins Museum, Kansas City, and the Minneapolis Institute of Arts. Gatti, whose name translates from the Italian as 'cats', sometimes signed his works with the rebus of a cat's face.

There is no equivalent to this present cabinet by Gatti so far recorded. While his ebony furniture pieces inlaid with ivory are far more known, like his contemporary Ferdinando Pogliani (1832-1899), he did make use of hardstones, principally of lapis lazuli, for instance used for columns and small hardstone roundels on a cabinet offered Sotheby's London, 7 November 1985, lot 513. A more extensive use of hardstones is encountered through a mirror frame sold Sotheby's London, Arts of Europe, 4 December 2012, lot 315, comprising Egyptian porphyry, lapis lazuli, green porphyry and jaspers.