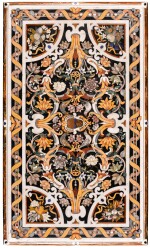 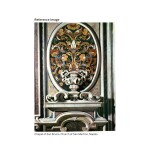 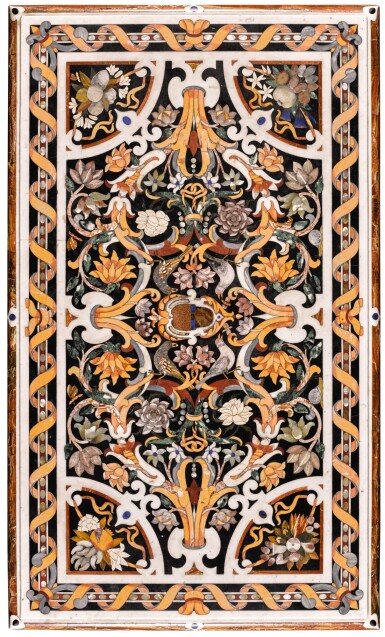 a central cartouche surrounded by large scrolls and foliate patterns protruding from the middle of each sides, bordered by a ribbon scrolling around a rectilinear line

This stunning table top is in excellent condition with minor old marks and scratches consistent with age and use. One minor area of light corrosion to the left centre side. There is one small repair to top left corner. It is sold with a purpose made metal sloped stand.

The style of this table top, with bold ornamental details and an expressive colour scheme, is closely comparable to altar fronts in Neapolitan churches and to works by the sculptor-architect Cosimo Fanzago (1591-1678), who arrived in Naples in 1608, where the market for sculptors and decorators was already vast and in continuous proliferation due to the exponential expansion of religious buildings in Naples.

Descendant of an ancient family of chiselers, founders and makers of astronomical clocks, the cavalier Cosimo Fanzago, a title he earned in 1627, was born in 1591 in Clusone (Bergamo). He began his artistic activity between Milan and Bergamo but, upon his father’s death, moved to Naples where he lived with his mother and uncle, Pompeo Fanzago. Working in his early years alongside the sculptor Angelo Landi, whose daughter he married, Fanzago soon became one of the greatest sculptors and decorators of the Baroque period in Naples, with his best known work in the church of Certosa di San Martino, described in 1670 by the Roman priest Richard Lassels as "the most sumptuous thing in all Europe” (Quoted by Chaney, E. The Evolution of the Grand Tour, London, 1998, pp.113).

The decoration by Fanzago in the Neapolitan churches of San Lorenzo Maggiore, of Santa Maria Nova and of San Martino, state a clear relationship between these and the present top, namely through the use of entwined foliate scrolls and floral branches and also the very unusual use of rock crystal, which can be seen in some balustrades at San Martino.

Additionally, the table top shares with Fanzago’s work, the generous use of giallo (subsequently heated to create a red chiaroscuro effect), which he used extensively in the foliage decoration of his chapel floors and his altar fronts.

Ultimately, the use of what seems to be the style and hard stones found in these churches suggests that the present exceptional top was most probably the work of a skilled marble worker trained in Fanzago’s workshop, although the more complex and fluid design suggest a date closer to the end of the century.

The tantalising crest, still unidentified but that recalls the bipartite crest of the city Naples, indicate that it might have been a specific commission from a local patron.

A further related example attributed to Fanzago, besides the ones already mentioned, include a top sold at Sotheby's New York, Important Old Master Paintings and Sculptures, 26 January 2012, lot 330 (sold $86,500).