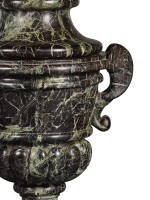 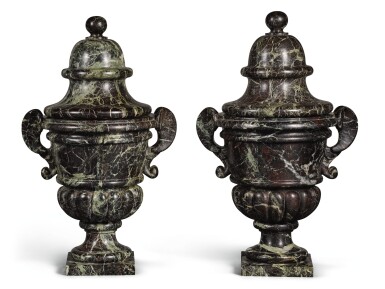 The bold and exaggerated design of these imposing vases relate to documented designs for porphyry vases of the same period. See for example, drawing of a vase that belonged to the Marqués de Carpio from 1682, with related S shaped handles, which, in the case of the present lot, have an attractive organic carved quality. The elongated lids are more distant from the classical canon which the vases are trying to emulate. Originally a set of four and split when sold in 1994; the other pair subsequently offered Christie's London, Le Goût Steinitz III, 6 December 2007, lot 423.