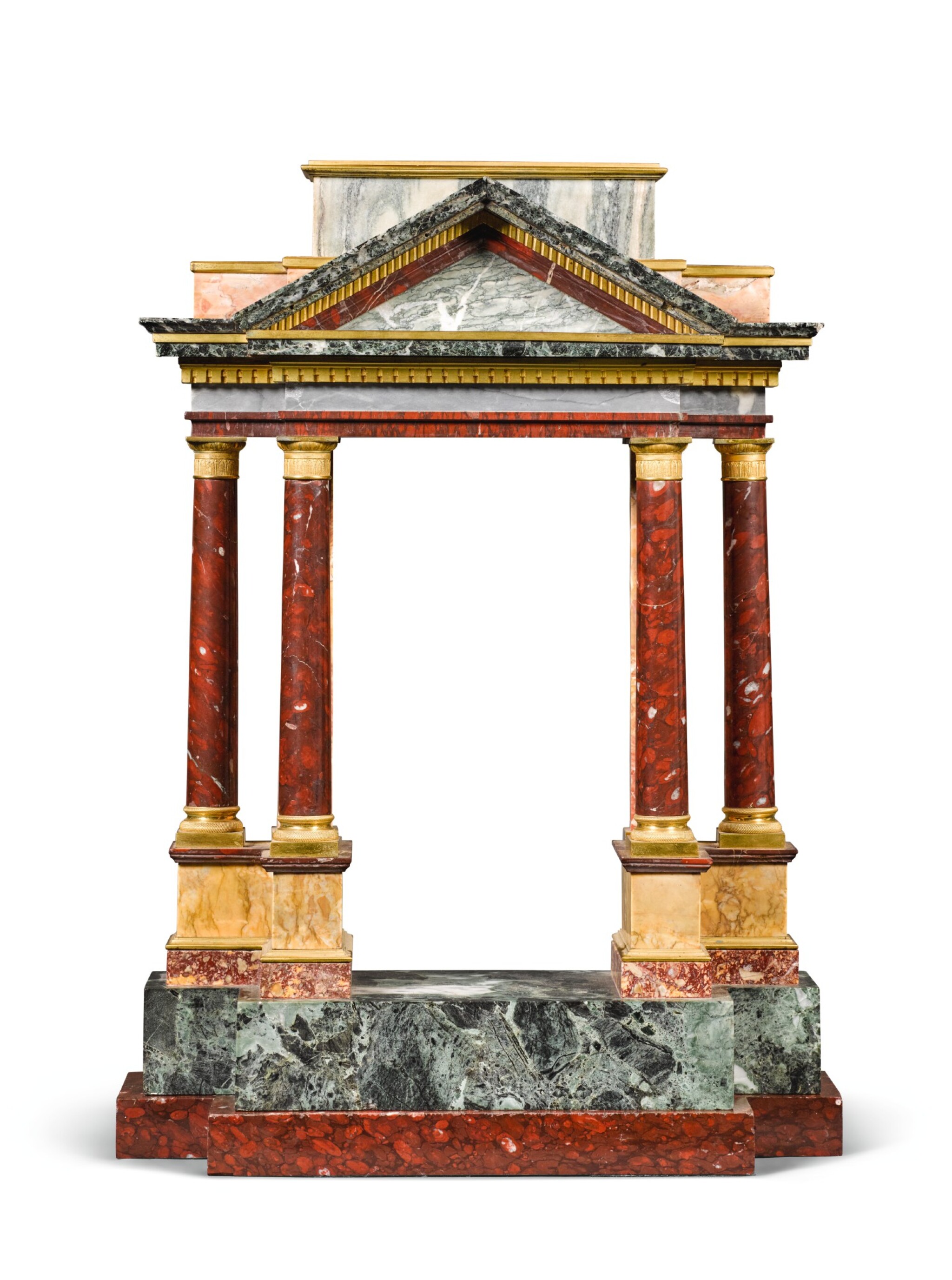 In overall good condition. The gilt-bronze mounts with minor tarnishing and small areas of oxidation. Minor chipping to the edges and corners of marble. One to two breaks to each column, which have been well repaired.

This impressive and colourful portico illustrates the type of production emanating from the royal Buen Retiro manufacture in Madrid. When Carlos VII of Naples assumed the Spanish throne as Charles III in 1759, he transferred the Capodimonte porcelain factory to the Buen Retiro park in Madrid and also established a pietre dure and mosaic workshop, the Laboratorio de Piedras y Mosaico (Pietre Dure and Mosaic Workshop). The manufacture was under the direction of Florentine Giovanni Battista Ferroni who brought into the workshops many fellow Florentine craftsmen including Domenico and Luigi Poggetti, and Francesco Sabatini and Domenico Stecchi, both of whom were active at the Opificio delle Pietre Dure, the Grand-ducal workshops in Florence. Altogether, they trained a generation of Spanish artisans.

The workshop became highly successful. The most celebrated early works produced by the Laboratorio are the series of nine tables with extraordinary trompe-l'oeil devices and illusionistic scenes which were designed by Charles-Joseph Flipart (1721-1797) and completed by 1788. With the emergence of Neoclassicism as the dominant international style by the late 18th century, the laboratory’s production were infused with the classical style. One of the most important pieces for this period is the surtout de table offered as a diplomatic gift by Carlos IV to Napoléon when they met in Bayonne in 1808. The magnificent table centerpiece pays homage to the grandeur of the Spanish monarchy and seems to recreate an ideal classical world as it gathers obelisks, temples, porticos, statues, busts, vases, and candelabra. This centerpiece notably includes two almost identical porticos, now both in French Royal Collections, which were later used to house clocks (inv. no. T401c and inv. no. F566C) -fig.1. On the basis of these comparisons, the design and quality of the present lot strongly suggests the portico was also produced at Buen Retiro, just before it was destroyed by invading French troops in 1808.