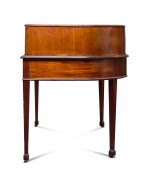 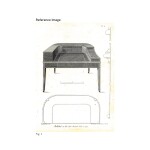 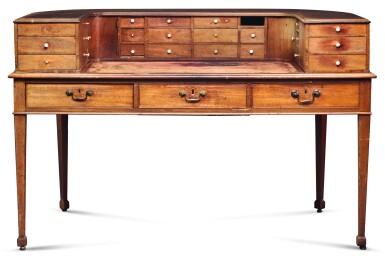 the D-shaped moulded superstructure containing an arrangement of small drawers with ivory handles, the baize-lined top above three frieze drawers on square tapering legs with block feet on wooden castors

In 'country house' un restored condition and will require remedial attention. The colour is uneven and there are areas of sun bleaching, notably to the inside of the superstructure. Losses to ivory handles. Cigarette damage and other scratches, ink stains and marks to the top. Baize lining is very distressed and will require replacement. Cock beading to one frieze drawer lacking. One drawer lacking.

This lot contains ivory. Due to recent changes in the laws of many countries (e.g. US, France) Sotheby's recommends that buyers check with their own government regarding any importation requirements prior to placing a bid. Please note that Sotheby's will not assist buyers with CITES licence applications where a buyer elects to either collect or arrange their own shipping, nor will Sotheby's assist with the international movement of ivory by air, either as freight or through hand carry. Sotheby's shipping will only assist in shipping the lot to either domestic UK or EU destinations, where delivery is made by road transport. A buyer's inability to export or import these lots cannot justify a delay in payment or sale cancellation.

In the Library at Spetchely there is a edition of The Cabinet-Makers London Book of Prices and Designs of Cabinet Work. This book is dated 1803 and it features a design by Hepplewhite, with a variant to each side (illustrated here, fig.1) which is very similar to the present lot. It is probable that Robert Berkeley, using this book of designs, has selected elements for his desk. These are restrained and practical and we see in the present lot the realisation of Robert's choices, albeit with a flourish to the base of each leg, in the form of a finely executed collared foot, possibly selected by him from those illustrated on plate 28.

This type of desk remains one of the more original and popular inventions of the late eighteenth century and as far as Robert Berkeley was concerned the early nineteenth century. As John Hayward notes, like the bureau à cylindre, after which the Carlton House desk was modelled, their innovation lay in being finished on all four sides such that they could stand in the middle of the room. (J. F .Hayward, English Desks and Bureaux, London, 1968, p.7).

One of the earliest references to desks of this form is found in an entry from the Prince of Wales' accounts in the Royal Archives which reveals an insight into a table of this form supplied by John Kerr, a favoured cabinet-maker of the Prince Regent[1].

The account verifies the existence of such a writing table in the late 18th century, supplied directly to the Prince for Carlton House prior to the general release of comparative designs such as those in George Hepplewhite's The Cabinet-Maker's London Book of Prices[2] and Thomas Sheraton's  The Cabinet-Maker and Upholsterer's Drawing Book[3] as well as the book owned by Robert Berkeley. In 1814 Rudolph Ackermann included a French fashioned writing table with rounded cartonnier section in his Repository of Arts naming it a ‘Carlton House table' and thereby implying its origins[4].