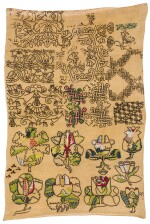 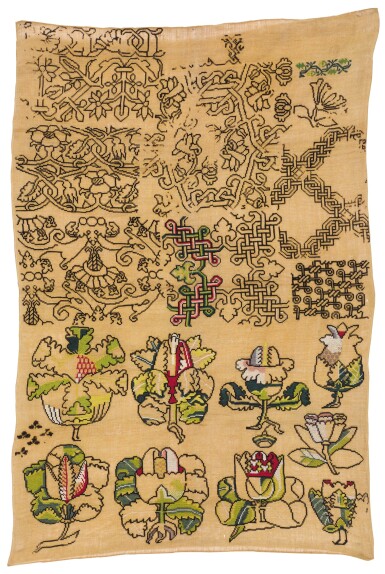 worked in polychrome and black silk, on linen ground, depicting sections of border designs, worked in black, in the upper half and large floral motifs worked in black and colours in the lower half

Edges of foundation textile are turned under at top and bottom and the side selvedges are original. Not lined. Some minor losses top right edge and top centre, to design of border motifs, where threads are no longer present. Otherwise very good overall condition.

Samplers are mentioned in inventories prior to 1650, but few examples remain from that period, and it was in the 17th century that they became especially popular and expertly worked, and importantly survived, as many were produced as part of a girls education and training of the skills needed. Spot motifs are individual motifs, such as flowers, insects, animals and figures, worked on a panel of linen or canvas, and often cut out and applied to another material. The charm of the spot motif samplers is that they show a variety of motifs, and techniques, and are usually unique combinations on the panel, with some motifs used being inspired by those in pattern books, such as Richard Shorleyker's, A Schole House for the Needle, 1631. A European tradition established in the late 16th century, with sources such as Gerard de Jode, Thesaurus Sacrarum Historiarum Beteris Testamententi, Antwerp, 1585.