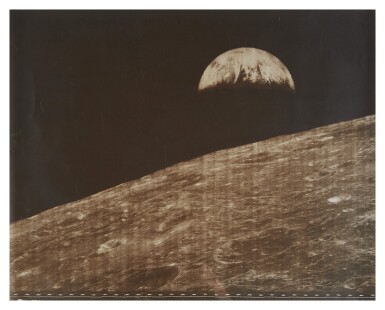 LUNAR ORBITER I. HUMANKIND'S FIRST LOOK AT THE EARTH FROM THE MOON, 23 AUGUST, 1966.

LUNAR ORBITER I. HUMANKIND'S FIRST LOOK AT THE EARTH FROM THE MOON, 23 AUGUST, 1966.

HUMANKIND'S FIRST LOOK AT THE EARTH FROM THE MOON, TAKEN 23 AUGUST, 1966

From 1966-75, NASA photographed and mapped 99% of the surface of the moon using five unmanned spacecraft known as the Lunar Orbiters. Getting the spacecrafts to their destinations was a miracle of engineering, but the process of taking the images and relaying them to earth was a technological feat that almost defies belief. The results were absolutely breathtaking, and the images revealed startlingly stark and beautiful landscapes.

Perhaps the most famous of the Lunar Orbiter images, this photo, taken by Lunar Orbiter I after responding to commands sent to it from Earth from a quarter million miles away, was taken from a vantage point of 730 miles above the far side of the Moon, on August 23, 1966.