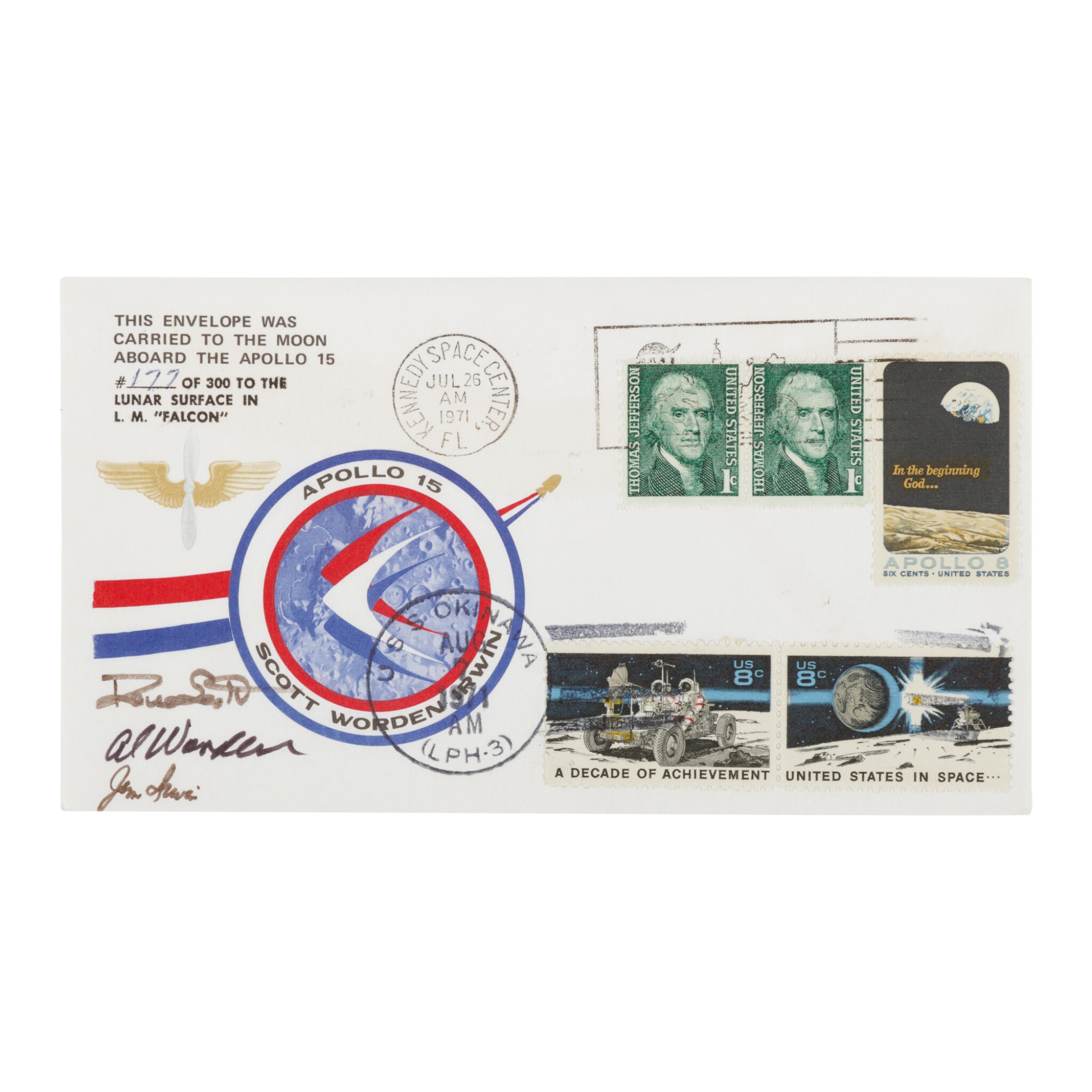 [With] additional unflown supporting documentation, including two printed cards stating: "This cover is #177 of 300 postmarked just prior to the launch of Apollo 15 on July 26, 1971 at Kennedy Space Center; stowed aboard the spacecraft in a sealed fireproof packet; carried to the lunar surface in LM "FALCON"; returned to earth in CM "ENDEAVOUR"; and postmarked immediately after splashdowh on August 7, 1971 by the U.S. Navy Postal Station aboard the recovery ship USS OKINAWA." And a notarized typed Certification letter dated 19 July 1983, detailing the chain of provenance of cover #177, SIGNED by ALFRED M. WORDEN, DAVID R. SCOTT and JAMES B. IRWIN.

FLOWN TO THE LUNAR SURFACE ON APOLLO 15, SIGNED by DAVE SCOTT, AL WORDEN, and JIM IRWIN.

Shortly after the successful completion of Apollo 15, it came to light that the crew had struck a deal with the German philatelist Hermann Sieger, agreeing to carry an additional 400 covers aboard the Lunar Module Falcon (100 for Sieger to sell, and 100 for each crewmember). Taking into account the 232 authorized covers on board, a total of 632 covers flew. However, it was only the 400 unauthorized covers which spent from 30 July to 2 August 1971 on the lunar surface inside Falcon. Following the discovery of the subsequent sales of these "Sieger" covers, the examples remaining in the possession of the astronauts were recovered and impounded by NASA.

By June of 1972, the public had become aware of the matter through widespread news coverage. The philatelic cabal had negative consequences for the crew, who were called upon to appear before a closed meeting of the Senate Committee on Aeronautical and Space Sciences, and were leveled with an official reprimand from NASA. None of the three Apollo 15 astronauts ever flew in space again. In 1983 the astronauts successfully filed a suit against the government for the return of all of the impounded covers, of which the present example was one.