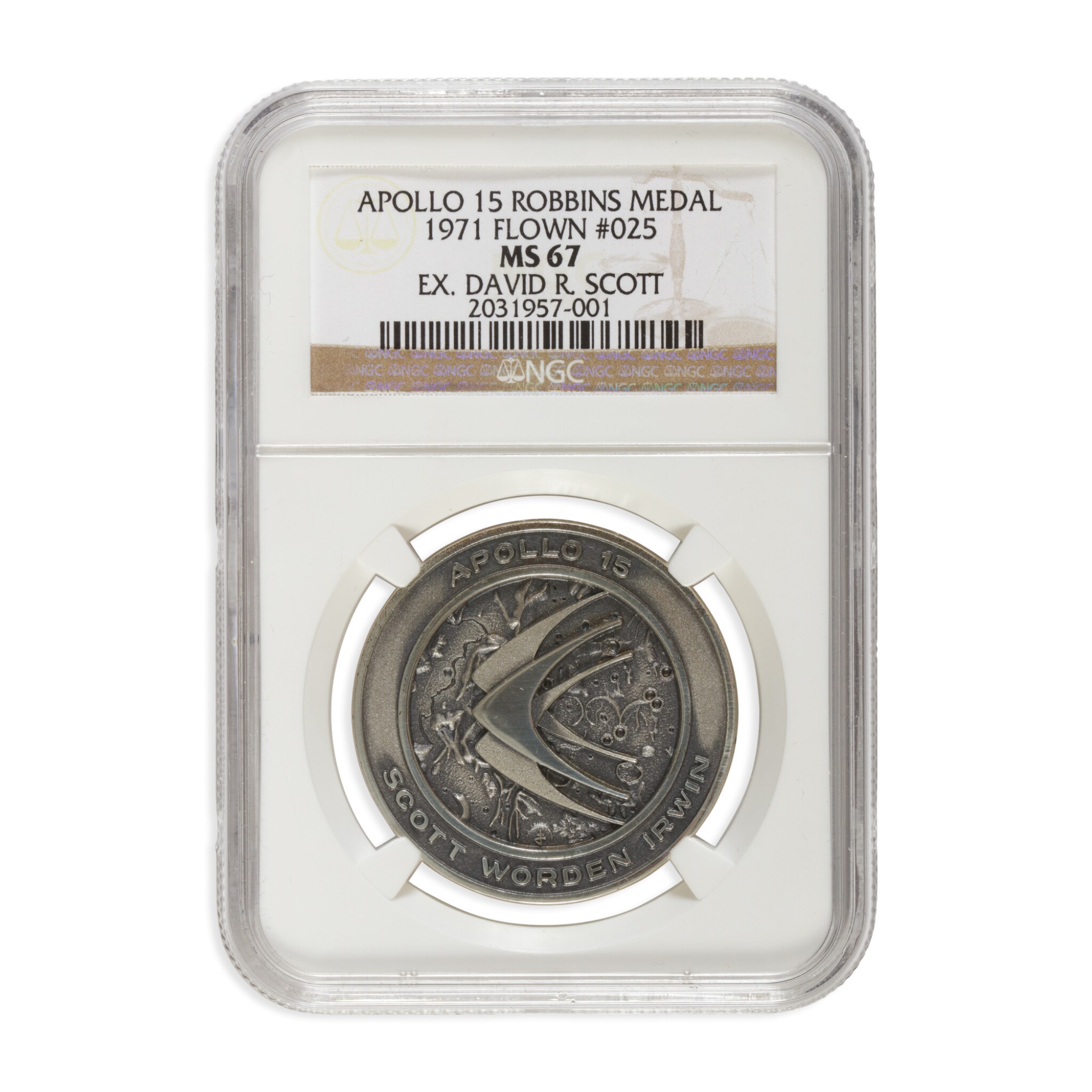 FLOWN Apollo 15 Robbins Medallion #025, NGC MS 67 (certificate number: 2031957-001), sterling silver, 35 mm in diameter. Obverse features the mission insignia with stylized birds flying over the primary exploration site for the mission, Hadley Rille, reverse engraved with the launch, landing, and return dates ("Jul. 26, 1971 | Jul. 30, 1971 | Aug. 7, 1971"), bearing the motto "Man's flight through life is sustained by the power of his knowledge" and the misspelled landing site "Appennines." With a Typed Letter Signed by DAVID SCOTT on his personal letterhead.

Prior to Apollo 15, the entire run of minted Robbins medallions had been carried on each mission. This mission broke with precedent, carrying only serial numbers 1-127. After the mission, the remaining 177 unflown medallions were restruck with silver from a Spanish shipwreck ingot, which had been carried on the spacecraft by Command Module Pilot Al Worden. Flown serial numbers 1-127 can be identified by a misspelling of the landing site, "Appeninnes" on the reverse.

Dave Scott's provenance letter reads, in part: "I hereby certify that the Apollo 15 silver medallion number '25' included with this letter is from my personal collection and was flown aboard Apollo 15, July 26–August 7, 1971. Apollo 15 was the fourth manned lunar landing and the first 'J' mission extended scientific exploration of the Moon ...

Prior to the mission, 304 medallions were struck by the Robbins Company ... these medallions contained a spelling error of the landing site (i.e., 'Appenines' instead of correctly 'Apenines'). Apollo 15 was the first extended scientific exploration of the Moon, and due to spacecraft weight limitations, only 127 medallions were actually carried on the flight. However in my Personal Preference Kit (PPK) I carried a Spanish silver bar salvaged from the treasure of the Spanish 'Plate Fleet' that was destroyed by a hurricane in 1715. After the mission the Robbins Company re-struck the 177 medallions that has not flown and included the flown Spanish silver in the mix, and corrected the spelling of 'Apennine.' Thus the unflown medallions (as noted by the correct spelling of 'Apennine') actually contain this flown Spanish Plate Fleet treasure silver that was carried to the Moon during the mission.

This Apollo 15 serial number '25' has been in my personal collection since the mission."