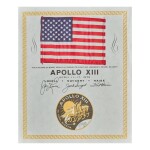 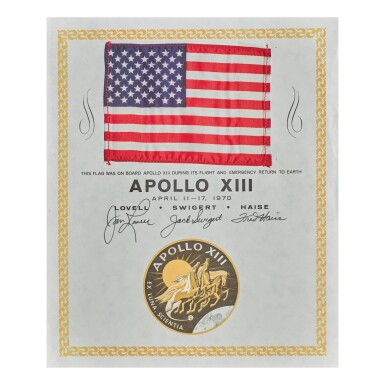 [APOLLO 13]. FLOWN ON APOLLO 13 STARS AND STRIPES, ON CERTIFICATE SIGNED BY THE ENTIRE CREW

[APOLLO 13]. FLOWN ON APOLLO 13 STARS AND STRIPES, ON CERTIFICATE SIGNED BY THE ENTIRE CREW

FLOWN stars and striped flag, 5 5/8 by 4 inches, mounted with tape to a 10 by 12 inch certificate reading "THIS FLAG WAS ON BOARD APOLLO XIII DURING ITS FLIGHT AND EMERGENCY RETURN TO EARTH | APOLLO 13 | APRIL 11-17 1970 | LOVELL · SWIGERT · HAISE," with the Apollo 13 emblem, SIGNED by JAMES LOVELL, JACK SWIGERT, and FRED HAISE below their printed names.

FLOWN ABOARD APOLLO 13 AND SIGNED BY THE CREW

"Houston, we've had a problem"

Apollo 13 was scheduled to be NASA's third moon-landing mission. Instead, however, following an oxygen tank explosion, the spacecraft shifted from a moon-bound landing unit, to a crippled vessel. To this day, the mission is regarded as evidence of NASA's innovation saving lives on the fly.