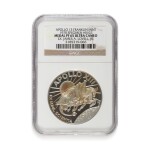 A RELIC OF THE ORIGINAL APOLLO 13 CREW — AN UNFLOWN FRANKLIN MINT MEDALLION BEARING THOMAS K. MATTINGLY'S NAME — ONE OF ONLY 200 MINTED

While Robbins medallions were struck for all of the manned Apollo missions, Franklin Mint was only engaged to produce commemorative medallions for Apollo 13 and 14. Only 200 medallions were struck, and they are noteworthy for being one of only a few items discovered to bear the names of the original crew. All 404 Robbins Medals minted to commemorate the Apollo 13 mission were restruck to bear the corrected crew names, and to remove the unrealized lunar landing date.

Jim Lovell's provenance letter reads: "I hereby certify that this Apollo 13 sterling silver Franklin Mint medal #0114, which also lists the original scheduled crew on its reverse, is one of the 200 original specimens that were made for me to take aboard the mission April 11-17, 1970. This medal is from my personal collection and has been in my possession since the mission until being offered now."