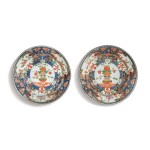 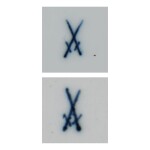 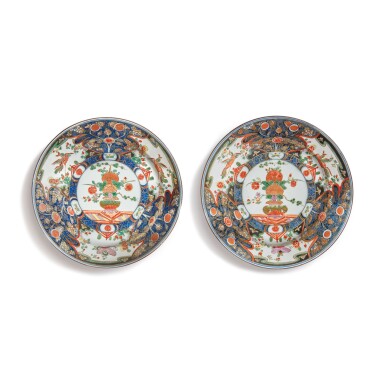 each characteristically painted in gilt-heightened underglaze-blue and enamels, the center with a vase of flowers and branches of pine resting on a footed stand within an underglaze-blue rim painted with flowering chrysanthemum issuing scrolling gilt tendrils and reserved with three cartouches, each with either a phoenix or a butterfly in flight above a fenced garden, the reverse with three flowering branches and a green and iron-red diaper border reserving panels of stylized fish or crustaceans, brown-edged rims, crossed swords marks in underglaze blue, incised Dreher's mark /// to inside edge of footrim.

Both plates in overall good condition with some minute flaking to the brown enamels at the rim edge, and some minor stacking wear. One plate with some wear to the gilding on the flower basket. Overall with minor manufacturing imperfections and light surface wear.

Although the design is based on Japanese Imari porcelain, it was also copied on Chinese porcelain; two large Chinese Qing Dynasty, Kangxi Period, circa 1720 dishes in this pattern, bearing incised Japanese Palace inventory number N: 130/ I, were sold at Sotheby's New York, March 20, 2018, lot 418. In the second half of the 18th century the pattern was in use at Frankenthal, and it was also chosen to decorate the service, known as the 'Sultan' service, produced at the Warsaw faience factory on the Belevedere Palace grounds of Stanislas Augustus Poniatowski, King Stanislas II of Poland, who presented it as a gift to Sultan Abdul Hamid I of Turkey in 1776. The service included an inscription in Turkish These gifts were sent as a sign of friendship and a token of good relations with the Emperor to the Sultan, a Khalif of the House of Osman, The City of Warsaw. Examples of the pattern on Frankenthal and Meissen porcelain, and Warsaw faience, are illustrated in Hofmann, 1932, pls. 493-496.