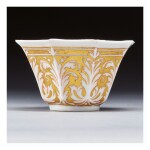 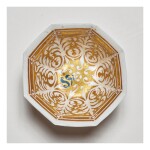 the interior and exterior with a gilt-ground over a red bole reserving scrolling acanthus leaves along the ribs of the teabowl, the well of the interior with an underglaze-blue roundel partially covered by gilding.

This teabowl, previously attributed to Vezzi, is discussed at length in a paper presented by Errol Manners before the English Ceramic Circle on June 16, 2015, in London and published the following year in its Transactions. He provides a compelling argument regarding a possible reattribution to one of an early English manufacture.

The teabowl, as Manners points out, bears similar stylistic qualities to four pieces of early porcelain known as the 'Buckingham group' due to their speculative connection to the Duke of Buckingham. These comprise two small jars and covers; the so-called 'Virtues' jar, named so after the source of their figural decoration; and a fourth piece, formerly in the collection of the Earl of Stamford, now in a private collection. The first three are retained at Burghley House, Peterborough, and were listed in 1683 on a draft 'Schedule of Gift' prepared for Elizabeth, Countess of Devonshire, and validated in 1690, following her death in 1689, for the bequest to her daughter Anne Cecil. This document authorized their transfer from Chatsworth to Burghley House.

In 2009 the present teabowl was analysed at the British Museum, London, focusing on its glaze, paste, and gilding. The purpose of the examination was to see if the piece had been made with a recipe similar to the Burghley Jars and the results were presented in an unpublished report in 2010. The unequivocal result was the 7% lead-content of the glaze which can be regarded as quantative. Manners concludes that result meant that all Asian porcelains as well as the three other European hard-paste porcelain factories Meissen, Du Paquier, and Vezzi could be ruled out.