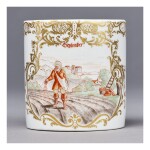 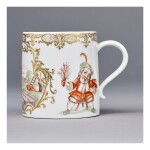 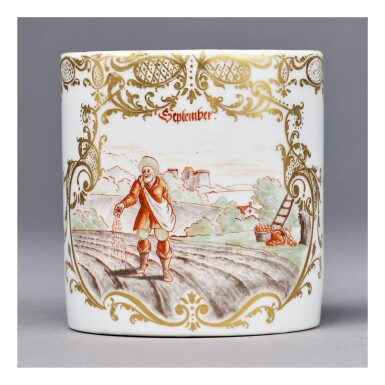 painted in the workshop of Franz Ferdinand Meyer of Pressnitz, with a scene of a Sower in a field beneath the title September in iron-red script, within a gilt foliate scrollwork cartouche, flanked on each side by a dwarf sitting on a stool, the exterior rim edge with a gilt diaper border, traces of crossed swords mark in underglaze-blue, impressed numeral 24.

The painter was clearly inspired by 'Month' mugs produced at the Meissen factory, of which a complete set of twelve is in the Rijksmuseum, Amsterdam, illustrated in Abraham L. den Blaauwen, Meissen Porcelain in the Rijksmuseum, Amsterdam, 2000, pp. 322-325, no. 231, who cites the present example. A mug titled 'July' painted by the same hand was sold at the Bourke sale, Sotheby's, May 12, 1959, lot 156, and further mugs are illustrated in Gustav E. Pazaurek, Deutsche Fayence-und Porzellan-Maler, Leipzig,1925, Band II, fig. 258, taf. 27. The celebrated 'Swan Service' made for Count Brühl included mugs of this small size which were referred to in the work records as Wermuthkrügel, [Vermouth mugs] (referenced in Ulrich Pietsch (ed.), Schwanenservice - Meißener Porzellan für Heinrich Graf von Brühl, Leipzig, 2000, p. 174.), an example of which was in the Collection of Nelson and Happy Rockefeller, sold in these rooms, January 18, 2019, lot 367.