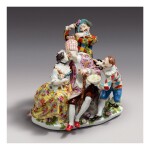 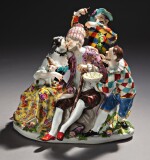 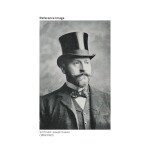 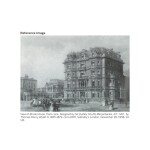 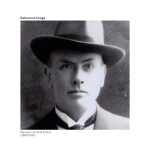 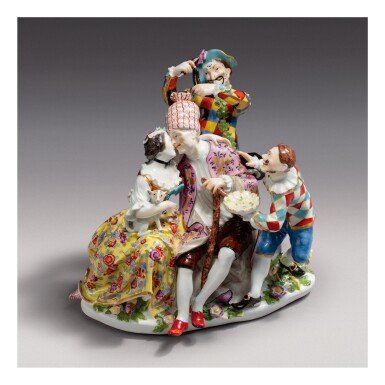 modeled by Johann Joachim Kändler, with an elderly man seated holding a crutch and leaning to kiss a young lady at his side, a small dog seated in her lap, Harlequin poised at the rear to crown him with feathers, while another commedia dell'arte figure offers him a plate of celery, all on a shaped mound base applied with flowers and foliage, crossed swords mark in underglaze-blue, twice impressed numeral 25.

It is thought the group may have been inspired by several graphic resources including an early 18th century engraving by Martin Engelbrecht after Molière's Le malade imaginaire, or Engelbrecht's engraving entitled 'Academia', published in Augsburg in 1725, see Meredith Chilton, Harlequin Unmasked, The Commedia dell'Arte and Porcelain Sculpture, New Haven, 2001, p. 193, where both engravings are illustrated.

The five day sale of the contents of Brook House attracted a considerable amount of attention from porcelain collectors, and the foreword of the porcelain section was written by one of the leading experts of the time. Arthur Hayden, The Connoisseur, Vol. XC, July-December 1932, reported of the sale: "...Then came the furniture, objets d'art and a few pictures. A feature of this portion was the choice of Meissen porcelain, mostly figures of the J. J. Kaendler period... The chief competitors for these beautiful pieces came from Paris, Berlin, Amsterdam, and Geneva; with the result that the 120 lots of the Kaendler period alone accounted for £8,578 of the total obtained by the sale [£25,636 13s]. The top price, £567, was for a ''crinoline'' group of the Countess Kossel, seated in a chair, with the Elector Augustus standing at her left side.... A harlequin group, 6 in. high, fetched £283 10s.; a group depicting a scene from the Italian Comedy, 7 3/4 in. high, [sold for] £462.", the latter possibly the present lot.