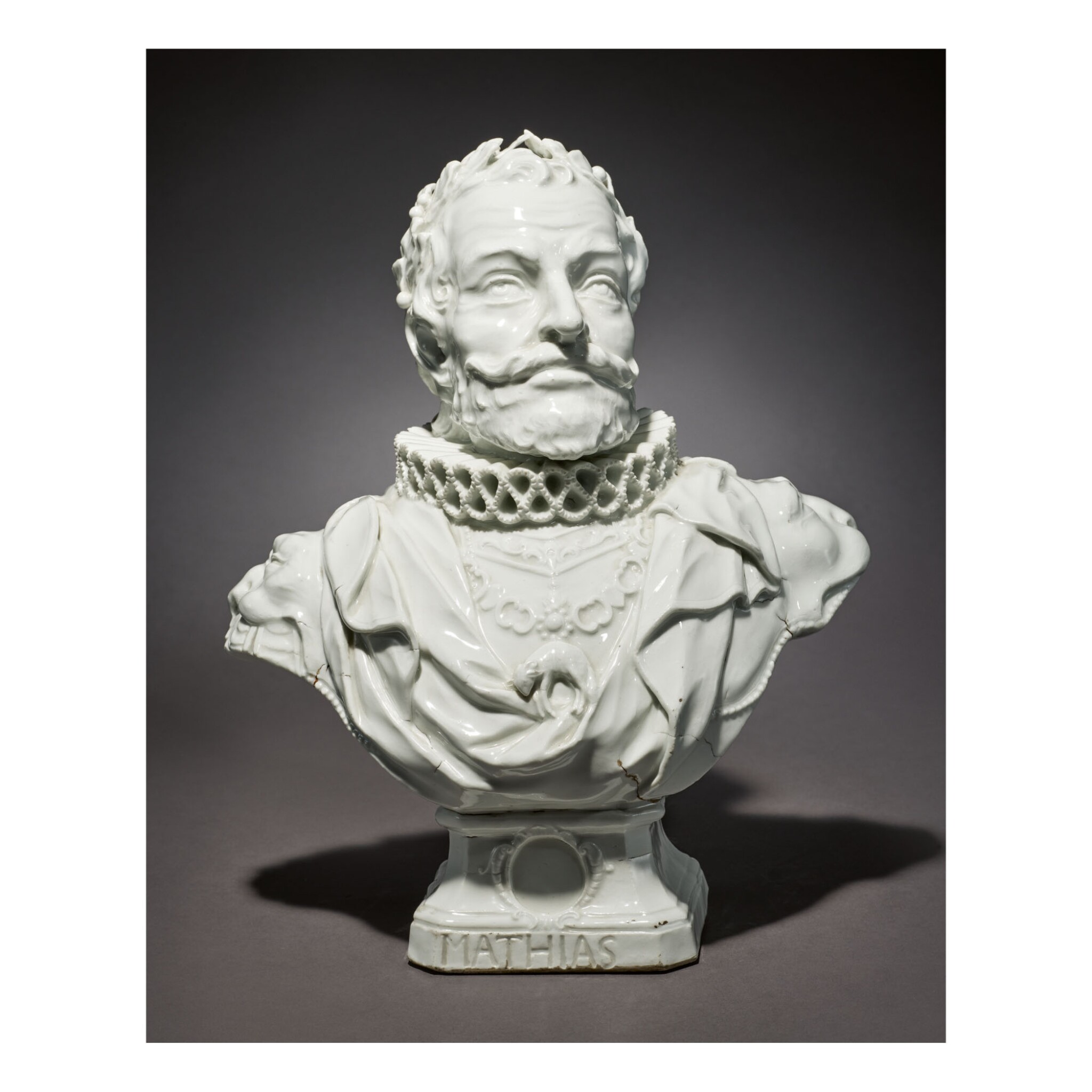 modeled by Johann Joachim Kändler and Peter Reinicke, in the white, wearing a laurel wreath, a ruff and the Order of the Golden Fleece, over a cuirass with lion-head masks at the shoulders, supported on a canted pedestal base reserving a molded scrollwork cartouche over the incised title MATHIAS, traces of crossed-swords mark in blue.

Several chips to the back lower edge of the corner of the base on his left. Numerous firing tears throughout, as visible in the catalgoue photo. Chips to the tips of the two topmost laurel leaves on his head. Small chip to back edge of his right shoulder. 1 inch firing flaw to the back of his head (from touching another piece in the kiln). Overall in very good condition.

Collection of the Counts of Waldstein, Schloss Dux, Bohemia

This important bust belongs to a series of seventeen depicting the Habsburg rulers of the Holy Roman Empire. The series was commissioned by Maria Joseph (1699-1757), Queen of Poland and Electress of Saxony, consort to Augustus III and daughter of Holy Roman Emperor Joseph I. The series portrays twelve Habsburg Emperors and five Kings beginning with Rudolf I (d. 1291) and ending with Charles VI (d. 1740), the last of the male line. An eighteenth bust related to the series depicting Charles VII is also recorded. The most comprehensive discussion on the series is the essay by Johanna Lessmann, in Maureen Cassidy-Geiger (ed.), Fragile Diplomacy, Meissen Porcelain for European Courts, ca. 1710-63, New Haven, 2007, pp. 119-134. Lessmann writes that the possible impetus for Maria Josepha, a Habsburg herself, to commission this series came from Vienna. The factory inspector Friedrich Gottlieb Aurenmüller recorded that in March 1744 the archduchess Maria Anna of Austria, (the sister of Maria Theresa), and her husband Karl Alexander of Lorraine, visited the Meissen factory. The series of busts is then mentioned for the first time in the Meissen work reports the following month, Cassidy-Geiger, 2007, p. 119.

The series was produced at crucial point when dynastic and political ties between Saxony and the Austrian Habsburgs were of the upmost importance. In August of the same year the Prussian Army invaded Bohemia and prompted the Second Silesian War in which Austria and Saxony were allied against Frederick II of Prussia. The bust of Matthias is first recorded Peter Reinicke's work report for January 1745: '(6) 1 Brustbild Kaysers Matthaie I. In Thon zu bohsiren angefangen', [(6) Started to model in clay 1 bust of Emperor Mathias], Maureen Cassidy-Geiger, The Arnhold Collection of Meissen Porcelain, 1710-50, New York, 2008, p. 24. The following year the bust is referred to in Kändler's report for January 1746 '6. Den Käyser Matthiam Eben falls Corrigiret und selbigen die gehörige Visage und Was sonsten dem Brust Bild an Richtigkeit gemangelt hinein poußiret', [6. The Emperor Mathias and modeled the proper facial features and whatever else had been incorrect in the bust], Cassidy-Geiger, 2008, p. 241.

Lessmann in Cassidy-Geiger, 2007, pp. 130-31, cites five busts depicting Emperor Mathias, of which three are published: one also from the Waldstein Collection, in the Uměleckoprůmyslové Museum, Prague; the present example; a third in the Museum of Applied Arts, Vienna; and two unpublished examples in the Esterházy Foundation, Burg Forchtenstein and Mosigkau Palace, Saxony-Anhalt.

Matthias (1557-1619) ascended as Holy Roman Emperor in 1612 following the death of his brother Rudolf II. He was King of Bohemia from 1611, and King of Hungary and Croatia from 1608 (as Matthias II). In December 1611 he married his first cousin Archduchess of Austria Anna Tyrol. Following Matthias's accession his policy was dominated by Melchior Klesl, Bishop of Vienna who hoped to bring about a compromise between Catholic and Protestant states within the empire in order to strengthen it, though Matthias ultimately was unsuccessful and the Bohemian Revolt of 1618 became the first hostile act of the Thirty years War. Matthias died the following year.

Twenty-two Habsburg busts were owned by the Counts of Waldstein until 1945 at Dux (Duchov) Palace in Bohemia. Augustus III had visited Duchov in 1739 and later acquired most of the paintings collection in 1741. Twenty of the busts were sold in the auction held at Galerie Horejs, Prague in 1949, of which twelve were acquired by the Uměleckoprůmyslové Museum, Prague.

The Prague collector Rudolf Just acquired six busts at the sale in 1949. Three of the six busts left his collection before the remaining part of his collection was sold at Sotheby's Olympia in 2001. The Maximilian II and Ferdinand III busts are now in the Ludwig Collection exhibited in Bamberg (illustrated in Lothar Hennig, et. al., Glanz des Barock Sammlung Ludwig in Bamberg, Bamberg, 1995, cat. nos. 164 and 162). The third bust, Emperor Charles VII, was sold anonymously at Christie's London, February 25, 1991, lot 173 and was subsequently sold at Bonhams London, July 2, 2019, lot 46. Ferdinand II and Josef I comprise the fifth and sixth, sold at Sotheby's Olympia, December 11, 2001, lots 146 and 147.