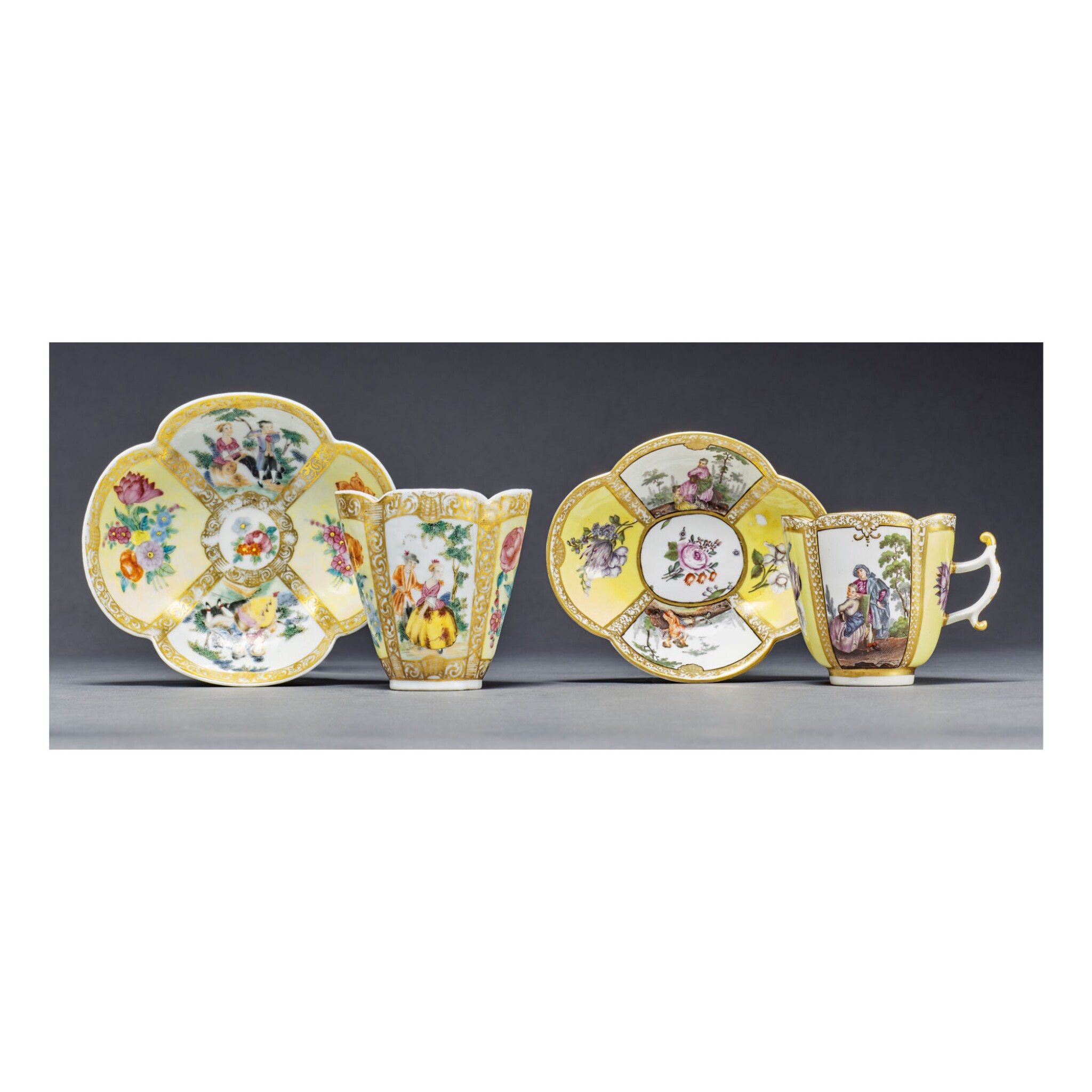 A MEISSEN YELLOW-GROUND QUATREFOIL CUP AND A SAUCER AND A RARE CHINESE EXPORT FAMILLE-ROSE QUATREFOIL BEAKER AND SAUCER CIRCA 1740 AND QING DYNASTY, TONGZHI PERIOD, CIRCA 1865

the Meissen cup and saucer painted with panels of Watteauesque figures in landscapes within gilt foliate or scaled borders, reserved on a yellow ground painted with small bunches of flowers, crossed swords marks in underglaze-blue, gilt numeral 3. to cup, H. to saucer; the Chinese beaker and saucer painted in Meissen style with similar subjects, pseudo AR marks in underglaze-blue.

The Chinese beaker and saucer: The beaker with a chip on one side of the body, possibly a kiln chip. There is also a forked hairline extending from the rim down to the foot, with associated minor losses. The saucer in overall good condition with one minor firing flaw to the underside. Both pieces with wear to the enamels and gilding, and with typical firing imperfections. The Meissen cup and saucer: The cup in overall good condition with some minor flaking to the gilding to the interior rim, the saucer interior with patches of misfired yellow enamel towards the base, and with an approx. 1/4 in. patch flaked off. Both pieces with minor firing imperfections and light wear to the surface.

This rare type of Chinese export beaker and saucer in the present lot is discussed in depth in David Sanctuary Howard and John Ayers, China For the West: Chinese Porcelain and other Decorative Arts for Export illustrated from the Mottahedeh Collection, London, 1978, vol. II, cat. no. 539. The authors note that the original AR (Augustus Rex, referring to Augustus the Strong, Elector of Saxony) mark was used in Meissen porcelain between 1723 and 1736, yet the particular style of decoration on the present example did not appear in Meissen originals until after the iconic crossed-swords marks were introduced, therefore pointing out the contradiction in date between the mark and the decoration. The authors continue to note that it was known that in Dresden, during the second half of the 19th century, decorators used the AR mark to decorate German porcelain to imitate earlier Meissen wares. Helena Wolfsohn was one of the best well-known decorators who utilized the AR mark until the Meissen factory took legal action against her. It is therefore plausible that one such later reproduction of Meissen porcelain, was sent to China in order to be copied. This, in turn, marks the Chinese example as an imitation of an imitation. It appears that five other examples are known, including the aforementioned example from the Mottahedeh collection, sold in these rooms January 30, 1985, lot 300, and again, October 29, 2000, lot 342. Another pair are in the Helena Woolworth McCann Collection in the Metropolitan Museum of Art, and illustrated in Clare Le Corbeiller, China Trade Porcelain: Patterns of Exchange, New York, 1974, cat. no. 37, and Elinor Gordon (ed.), Chinese Export Porcelain: An Historical Survey, New York, 1975, p. 80.