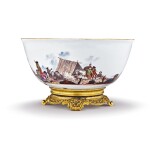 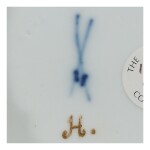 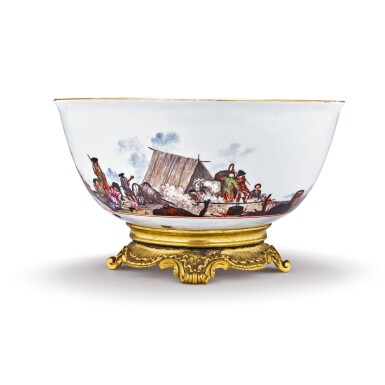 later mounted in gilt bronze, painted with a continuous landscape of a military encampment with soldiers resting and cooking over a fire, above concentric circles in iron-red with two shadowed insects below, the interior with a similar landscape medallion, the rim edged in gilding, crossed swords mark in underglaze-blue, gilt letter H, impressed Dreher's mark of two circles for Johann Gottlieb Kühnel (Rückert, 1990, p. 124).

There is a 3/8 inch chip to the exterior rim above and to the right of the main scene. Very minor wear to the gilding on the rim.

Lisa and Heinrich Arnhold, Dresden, May 1928