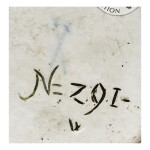 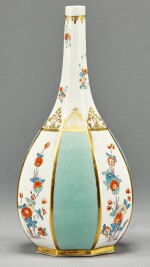 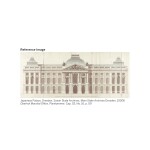 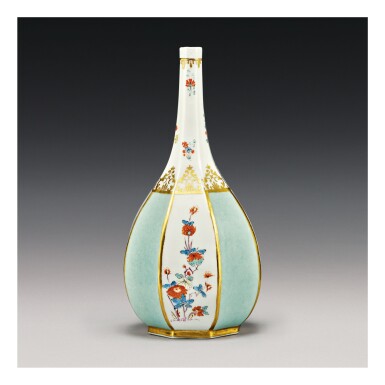 The rim above the band of gilt decoration is entirely overpainted, it is not possible to see the extent of the original damage this covers. The restoration is old and could be redone better. The gilding on this top band is retouched.

There is a small scratch to one celadon panel.

A 1730 projected floor plan of the Japanese Palace shows Meissen porcelains were allocated to the upper floor. On the plan a square-shaped pavilion room on the facade facing the city is inscribed 'Seladon Porcell', published by Samuel Wittwer, The Gallery of Meissen Animals, Augustus the Strong's Menagerie for the Japanese Palace in Dresden, Munich, 2006, p. 33, pl. 33. Asian porcelains were allocated to the lower floor.  In a contemporary account by Johann Georg Keyssler, of October 23, 1730, he describes the Japanese Palace: 'The rooms of the upper story, which is to be thirty-eight feet high, are to contain nothing other than Meissen porcelain...The second room is to contain many kinds of celadon-colored porcelain with gilding, and the walls are to be fitted with mirrors and other ornaments.' Wittwer, 2006, pp. 263-64.

A 'Specification von Porclian' of 1736, which was probably produced in conjunction with French Architect Zacharia Longuelene's plans of 1735, includes under 'No. 2' hundreds of seladon wares including 24 eight-sided bottles. For the full document see Maureen Cassidy-Geiger, 'Meissen Porcelain ordered for the Japanese Palace: A Transcription of the Specification von Porcilan of 1736', Keramos 153, 1996, where celadon wares are listed on pp. 120-121.

Notable examples of seladon bottle vases to appear at auction bearing the Japanese Palace inventory number N=291-W include another example of the present form, sold at Sotheby's London, April 14, 2011, lot 393, formerly in the Rothschild Collection sold in an anonymous sale, Christie's London, October 17, 1977, lot 65; one sold at Christie's Geneva, November 10, 1986, lot 146 (together with a one with inventory number N=332.W); and two examples sold at Christie's London, June 2, 2009, lot 53.