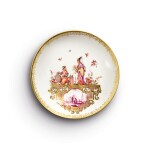 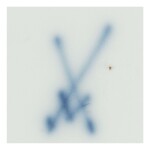 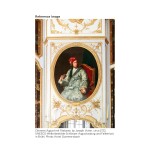 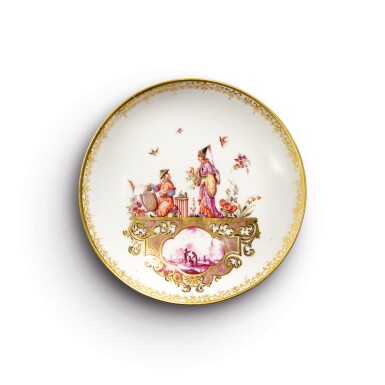 finely painted with two Chinoiserie figures, one figure seated holding a Böttger lustre shield bearing a gilt CA monogram, supported on a bracket reserving a quatrefoil panel of a harbor scene within a frame with Böttger lustre panels, the rim with a gilt-edge and scrollwork band, the underside with three small sprays of Kakiemon flowers, crossed swords mark in underglaze-blue, impressed Dreher's mark of an asterisk for Gottfried Benjamin Bergmann, or Paul Wildenstein (Rückert, 1990, p. 102).

Good condition, with a little minor rubbing to the gilding on the border, visible at approx 3 o'clock in the catalogue photo.

Recorded in the 1761 inventory of the Indianisches Haus, Brühl, and moved to Bonn the same year

Clemens August of Bavaria (1700-61), was born in Brussels in 1700, the fourth son of the Max Emanuel II, the Wittelsbach ruler of Bavaria and his second wife Princess Teresa Kunegunda Sobieska of Poland. In 1723 he succeeded his uncle as Archbishop and Elector of Cologne. In 1725 he was ordained a priest and two years later was consecrated by Pope Benoît XII. In 1728, he was elected Bishop of Osnabruck and in 1732 he was elected Grand Master of the prestigious Teutonic Order.

This saucer belongs to the celebrated armorial chocolate, coffee and tea service made for the Elector in 1735. The importance of the Elector's position and esteem in which he was held is reflected by the incorporation of his either his initials or full name in gilding into the finely painted Chinoiserie figures by the Meissen decorators.

The service originally comprised twelve beakers and saucers and twelve teabowls and saucers. For a comprehensive discussion of the service see Unterberg, 2005, where known pieces and their locations are recorded. A coffee pot, bowl, and six teabowls and saucers are in the Museum für Angewandte Kunst, Cologne, illustrated in Barbara Beauchamp-Markowsky, Europäisches Porzellan und Ostasiatisches Exportporzellan Geschirr und Ziergerät, Cologne, 1980, pp. 101-108, tafs. 4-11.

Notable auction sales of pieces from the service include: a two-handled beaker and saucer, sold at Sotheby's London, June 29, 1982, lot 118; a second beaker and saucer from the Hoffmeister Collection and illustrated in Dieter Hoffmeister, Meißener Porzellan Des 18. Jahrhunderts Katalog Der Sammlung Hoffmeister, Hamburg, 1999, Vol. II, no. 311, sold at Bonhams London, November 25, 2009, lot 78, and again in the same rooms, December 2, 2015, lot 42; a teabowl and saucer from the Frederick J. and Antoinette H. Van Slyke Collection, Baltimore, sold at Sotheby's New York, September 26, 1989, lot 107, was acquired by the Hoffmeisters and illustrated in Hoffmeister, 1999, Vol. II, no. 310, and subsequently sold at Bonhams, November 24, 2010, lot 66.