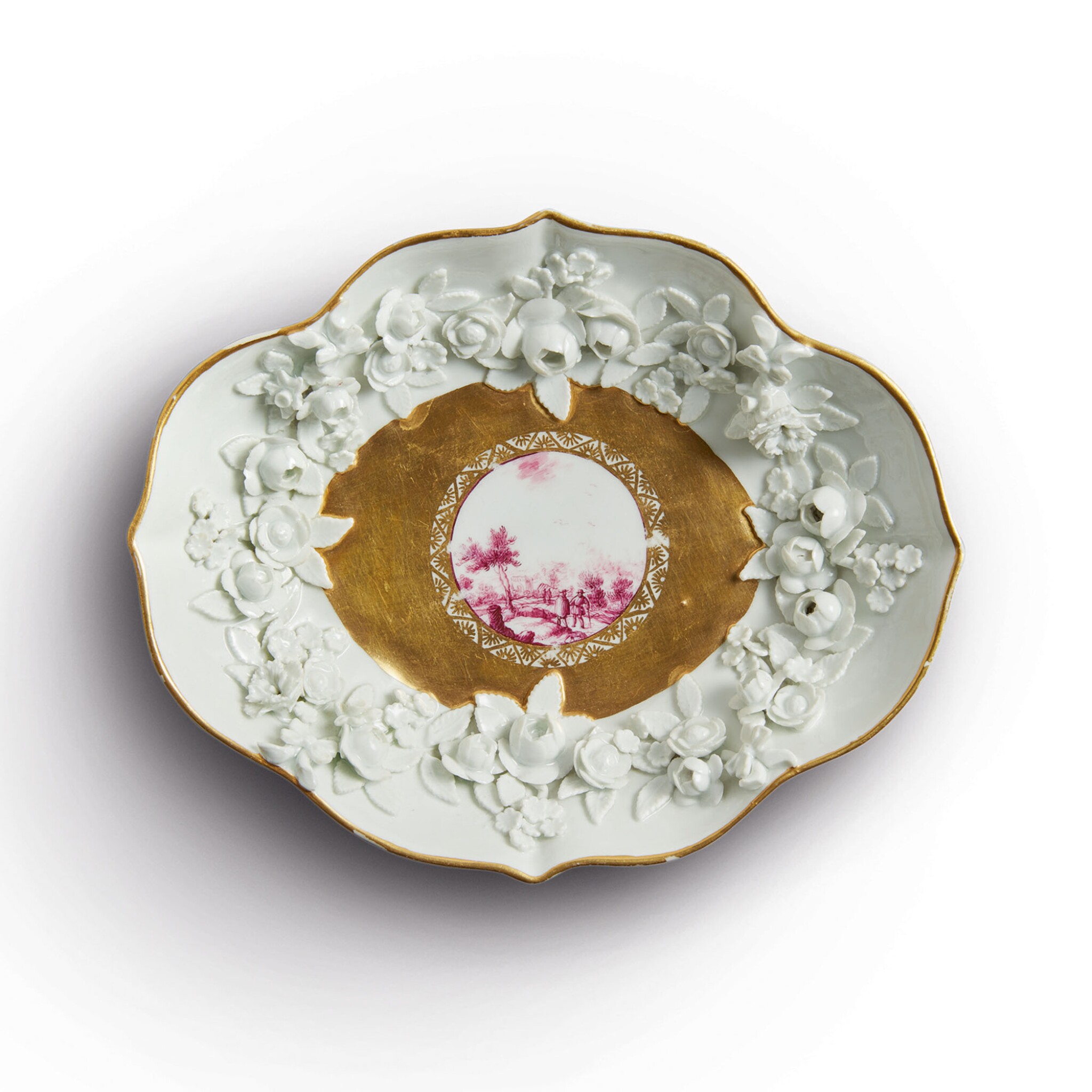 of lobed form applied in high relief around the cavetto with flowers and leaves, the center with a circular medallion landscape in puce camaïeu reserved on a gilt ground, the underside with four gilt flowering branches, crossed swords mark in underglaze-blue, incised Dreher's mark X to inside edge of footrim for Johann Christoph Pietzsch, Sr. or Johann Daniel Rehschuh (Rückert ,1990, pp. 123-24).

Several small patches of gilding loss on the rim edge. Small patches of wear to gilding on interior on the patterned band around the panel. Very, very minor chips and losses to the applied white flowers.

This exquisite form is associated to porcelain tea services made for Sophia Dorothea, Queen consort to Frederick William I of Prussia, and Maria Josepha, Electress of Saxony and Queen of Poland, consort to Augustus III.

Dr. Wittwer's essay, 'Liasons Fragiles, Exchanges of Gifts between Saxony and Prussia in the Early Eighteenth Century', in Maureen Cassidy-Geiger's book, Fragile Diplomacy, Meissen Porcelain for European Courts ca. 1710-63., New York, 2007, pp. 100-101, illustrates pieces from this service, fig. 5-13, now in the Kunstgewerbemuseum, Berlin, and reproduces passages from Kändler's work records for November 1735 in which the modeler meticulously describes creating white roses, leaves, buds and bouquets for bouillon cups, saucers and covers, "'...so natural that they seem to have thorns on them'". A similar entry by Kändler for May and June 1738 refers to a complete service, and an entry for September 1739 refers to "the little-flower service for Her Royal Majesty" (p.101).

The selection of pieces which were in the collection of Georg Spiegelberg, Hannover, sold at Rudolph Lepke's Kunst-Auctions-Haus, Berlin, December 4-5, 1928, lot 366, included five further stands of this form. Another group was sold by the executors of the late Prince S. A. Radziwill, Christie's London, July 4. 1977, lot 170 and a selection of this service was in the collection of the late Siegfried and Lola Kramarsky, sold at Christie's New York, October 30, 1993, lot 31, which included two two-handled cups, covers and stands, a teapot and cover, a square teapot stand, an oval shaped stand and a tall two-handled cup, cover and stand. A saucer of this shape, was sold at Bonhams London, November 26, 2014, lot 177, and a two-handled écuelle, cover and stand, circa 1735-38, was sold at Sotheby's, London, October 25, 2016, lot 547.