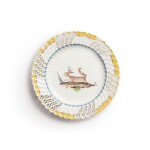 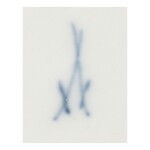 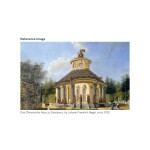 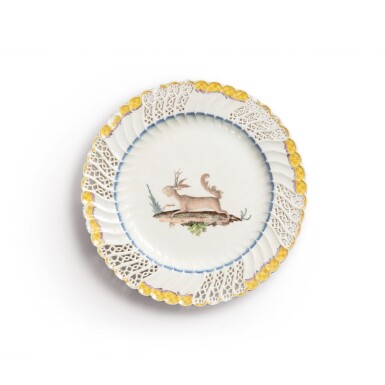 painted in the center with vignette of a jackalope, within a blue edged border above the cavetto, the spirally-molded rim pierced with six trelliswork panels and painted with a yellow-ground diaper border edged in puce scrollwork, crossed swords mark in underglaze-blue, impressed numeral 56.

There are numerous chips around the rim edge, mostly to the upper edge. Some of the undersides of the chips show old restoration, which has now been mostly removed. The surface of the plate is quite worn, including the enamels on the edge of the rim and the blue enamel on the high points of the molding. The enamels of the animal in the center have a slightly flat worn appearance and are covered in fine . There are traces of gilding on the rim which is otherwise mostly worn away. There are circular firing flaws in the glaze in the center, which have been polished, presumably at the factory. These flaws appear on other plates in this service.

The 'Japanese Service' was the last of six services ordered by the Prussian King Frederick the Great. In November 1762 Frederick gave specific instructions on how the service should be modeled and painted; the forms were to be ‘antique’ and ‘muschelicht’, [antique or old fashioned and shell like] imitating French silver shapes and painted with ‘…Elephanten, Venozeros… und andere Indianische Thiere und Vogel’, […Elephants, Rhinoceros… and other Indian animals and birds.], Beauchamp-Markowsky, 1981. The King chose yellow, as it was the color of the Emperors of Imperial China and perfectly suited the fantastical interiors of the 'Chinesisches Haus', designed by Johann Gottfried Büring between 1755 and 1764. Frederick the Great's Meissen porcelain orders are discussed in detail in the paper by Wittwer, 2010.

The first significant group from this service to appear at auction was fifteen plates from the collection of Baron Erich von Goldschmidt-Rothschild, sold at Christie’s Geneva, May 9, 1988, lots 152-166; a single plate from the 1988 Goldschmidt-Rothschild sale sold again at Christie's London, July 10, 2007, lot 128; two plates were in the Gustav and Charlotte von Klemperer collection, subsequently sold at Bonhams London, December 8, 2010, lot 70; and three plates and a reticulated dessert plate were in the von Dallwitz Collection, Berlin, visible in a photograph of the von Dallwitz home reproduced by Sebastian Kuhn in Cassidy-Geiger, 2008, p. 45, fig. 5. Reticulated dessert plates rarely appear at auction, two were sold at Christie’s London, December 11, 2007, lot 106 and 107. Beauchamp-Markowsky, 1981, illustrates a dessert plate in the Cologne Kunst-und-Gewerbe Museum, p. 20, fig. 4; four reticulated dessert plates painted with birds were sold at Sotheby's London, May 4, 2017, lots 163-166, and most recently a reticulated dessert plate, painted with a leopard, was sold at Bonhams London, July 2, 2019, lot 49.

A jackalope is a fantasy creature with the body of a rabbit and the horns of an antelope. Its name the combination of jackrabbit and antelope, the horned rabbit features in the illustrations of natural history texts as early as the 16th and 17th centuries.

Sotheby’s Scientific Research department used non-invasive XRF for this lot to screen the green enamel for chromium, which was detected. However, it is possible that the green enamel was later re-touched due to extensive wear or misfiring.