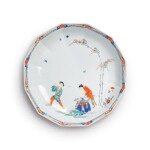 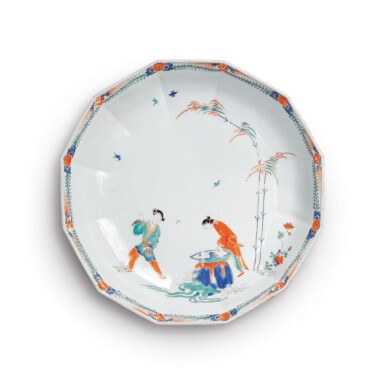 painted in Kakiemon style, depicting the legend of 'Shiba Onko', the youth about to throw a stone at a large water jar to release his trapped friend while another looks on, the rim with flowers and trailing leaves, erased crossed swords mark in blue enamel, incised Japanese Palace inventory number N=34-W.

The rim appears to have possibly been dressed with a brown edge. This is now almost entirely gone - either rubbed away or lightly polished. A four inch by two inch section of the rim has been broken out in two pieces and restored back in. There is a half inch restored chip to the rim. Enamels have some slight stacking wear. The underside of the base has a ground out firing fault to the center.

This dish was part of the large group of Meissen porcelains which copied Chinese and Japanese models that were ordered by Rudolph Lemaire, the French Merchant. The porcelain was subsequently seized on behalf of Augustus the Strong and were incorporated into the Saxon Royal Collection housed at the Japanese Palace. For a further discussion of the Lemaire group of porcelain see the note to lot 353 and Weber, 2013, Band II, where an example of the present lot, from the Schneider Collection, is illustrated, cat. no. 115.