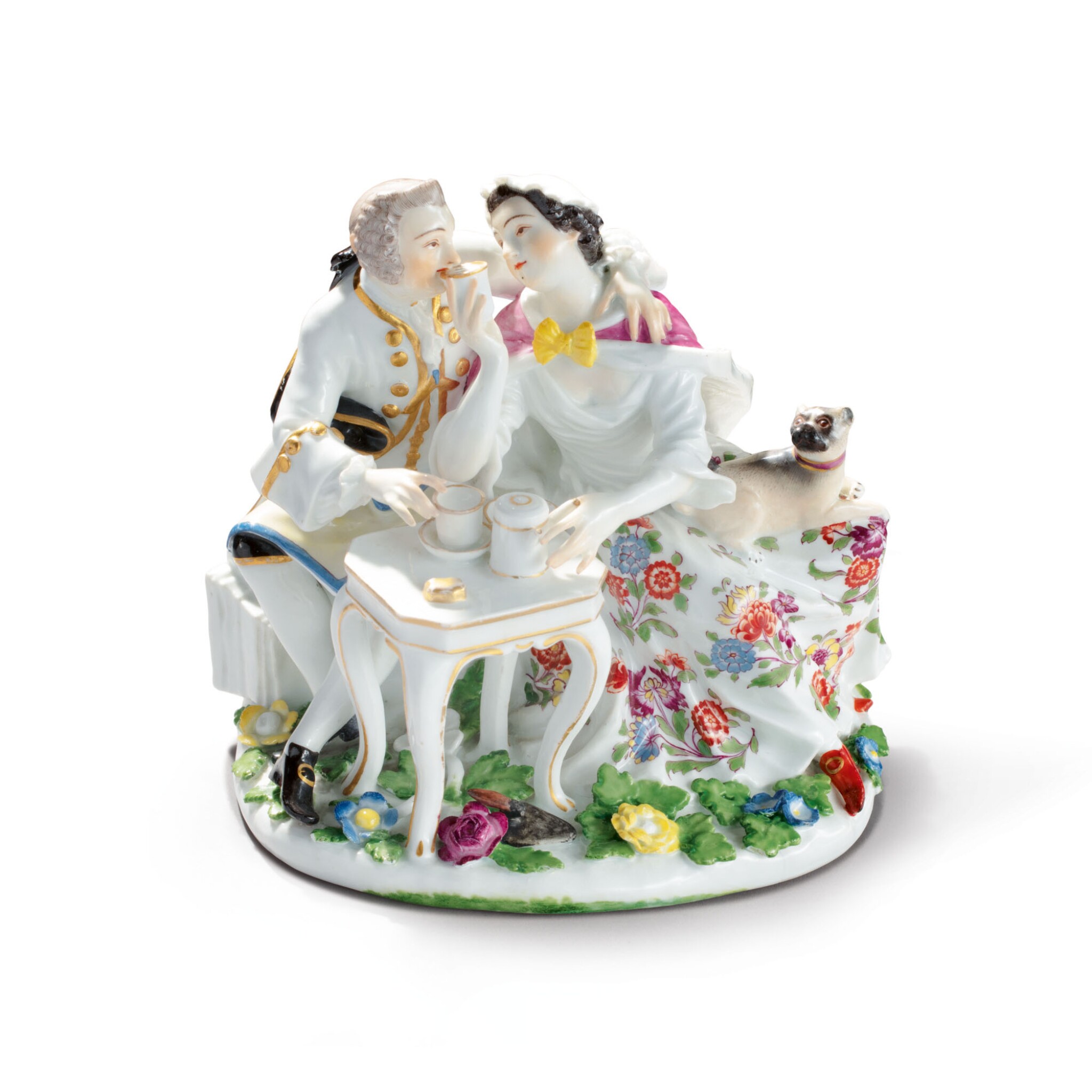 modeled by Johann Joachim Kändler, seated on an upturned pedestal at a table, she, holding a beaker to her partner's mouth and reaching for a hot chocolate pot on the table and wearing a puce cloak and a dress painted with indianische Blumen, a pug resting in her lap, he, with his arm around her, wearing a white frock coat, a right-angle square around his neck and an apron, a trowel at the base of the table, all on a small mound base applied with flowers and leaves, crossed swords mark in underglaze-blue.

Two fine firing related haircracks run across underside of base beneath male figure and female figure. Both cracks run up the back of the group, one extending up and across the corner of her skirt, the other running up the base of his seat. These cracks appear to have been stablized. They are not visible when looking at the figure group from the front. Restoration to his right fingers and top of beaker. Restoration to her left fingers. Restoration to head of pug, tip of her shoe and minor chips and restoration to applied flowers and leaves on base.

Kändler notes in his Taxa, or work records, on November 21st 1744, 'One group of freemasons, a freemason in his clothing with fur apron seated next to a lady of the Mopsorden who offers him chocolate from a table by her side, a dog on her lap, 16 Talers.'", Angela Gräfin von Wallwitz, Celebrating Kaendler, Meissen Porcelain Sculpture, Zum 300. Geburtstag Johann Joachim Kaendlers 1706-1775. Porzellanskulpturen aus Meissen, Taufkirchen, 2006, p. 122.

The constitution of the Order of the Pugs (Mopsorden) was designed in 1740 as a fraternal group for Roman Catholics who had been forbidden to join the Freemasons and practice their rites by Pope Clement XII 's 1738 bull, In Eminenti Apostolatus Specula. The para-Masonic secret society was patronized by the most illustrious persons of Germany and believed to have been founded in Bavaria by the elector of Cologne, Clemens August of Wittelsbach (1700-1761). It was the first masonic order that welcomed women as members on the condition that they were Catholic.