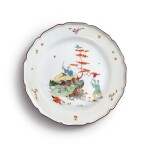 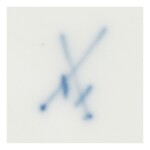 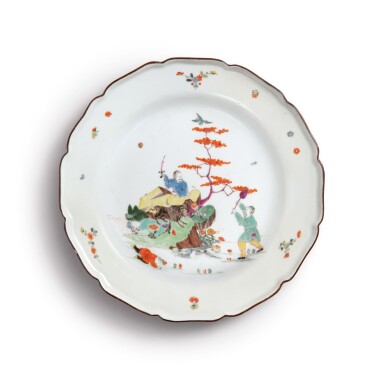 painted in the manner of Adam Friedrich von Löwenfinck with Chinoiserie figures in a minimal rocky landscape attacking a fabeltiere, a recumbent child in the foreground, with scattered Kakiemon flower sprigs and a brown-edged rim, crossed swords mark in underglaze-blue, impressed Dreher's mark of a quartered circle.

The lower half of the rim has spray around the edge. This appears to cover areas of rim chipping at 4 o'clock, six o'clock , seven o'clock and 9 o'clock. There is a further restored rim chip at approx 1 o'clock. Minor stacking wear to enamels.

Plates of this distinctive type of decoration have traditionally been associated with the Villiars family, the Earls of Jersey. In 1948 the collector Ralph H. Wark purchased a group of round and oval dishes, octagonal plates and tankards decorated similarly, which was said to once have been in the collection of the Earls of Jersey. The group is now in the collection of The Cummer Museum of Art & Gardens, Jacksonville, Florida, and is illustrated in Pietsch, 2011, pp. 214-225, cat nos. 200-212. Twenty-one plates of this type are at Osterley Park House, Greater London, which was given to the National Trust by the 9th Earl in 1949. In 1860 Sarah Sophie, Countess of Jersey, made an inventory of her London residence in Berkeley Square in which she recorded "Old China- 33 Dresden plates Chinese figures", den Blaauwen, 2000, p. 279, cat. no. 202.

Wark considered the painting to be by Adam Friedrich von Löwenfinck. However, some pieces painted in this manner have impressed numerals and are therefore dateable to after Löwenfinck's departure in 1736, indicating that other artists at Meissen worked in this style, and that there may have been more than one service of this type.