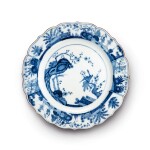 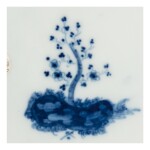 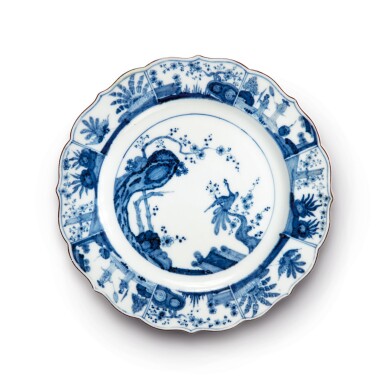 painted in underglaze-blue in Chinese style with a stylized landscape of a peacock perched on a flowering branch and other gnarled branches and rockwork, the brown-edged shaped rim painted with a border of four alternating pairs of panels, including Chinoiserie figures and stylized foliage and a bird, the reverse with a band of meandering flowers enclosing a central flowering prunus tree issuing from rockwork, crossed swords and dot mark in underglaze-blue, impressed numeral 20.

One and a half inch long area of restoration to rim edge at approx 12 o'clock and a small restored chip at approx 4 o'clock - restoration is yellowed.

Notable examples of this pattern include those in the Wark Collection illustrated in Pietsch, 2011, pp. 108-109, no. 69; another from the collection of Roy Byrnes, sold at Christie's, White Gold 18th Century Porcelain from Meissen and Du Paquier Property of The Byrnes Children Trust, Christie's London, May 12, 2010, lot 76; and a third in the Hoffmeister Collection, published in Hoffmeister, 1999, Vol. II, no. 297. Cassidy-Geiger, 2008, p. 489, comments that the motif on the reverse is based on a Japanese model, an example of which was sold at Christie's Zürich, Schloss Herblingen Schaffhausen, September 14-18, 1998, lot 68.