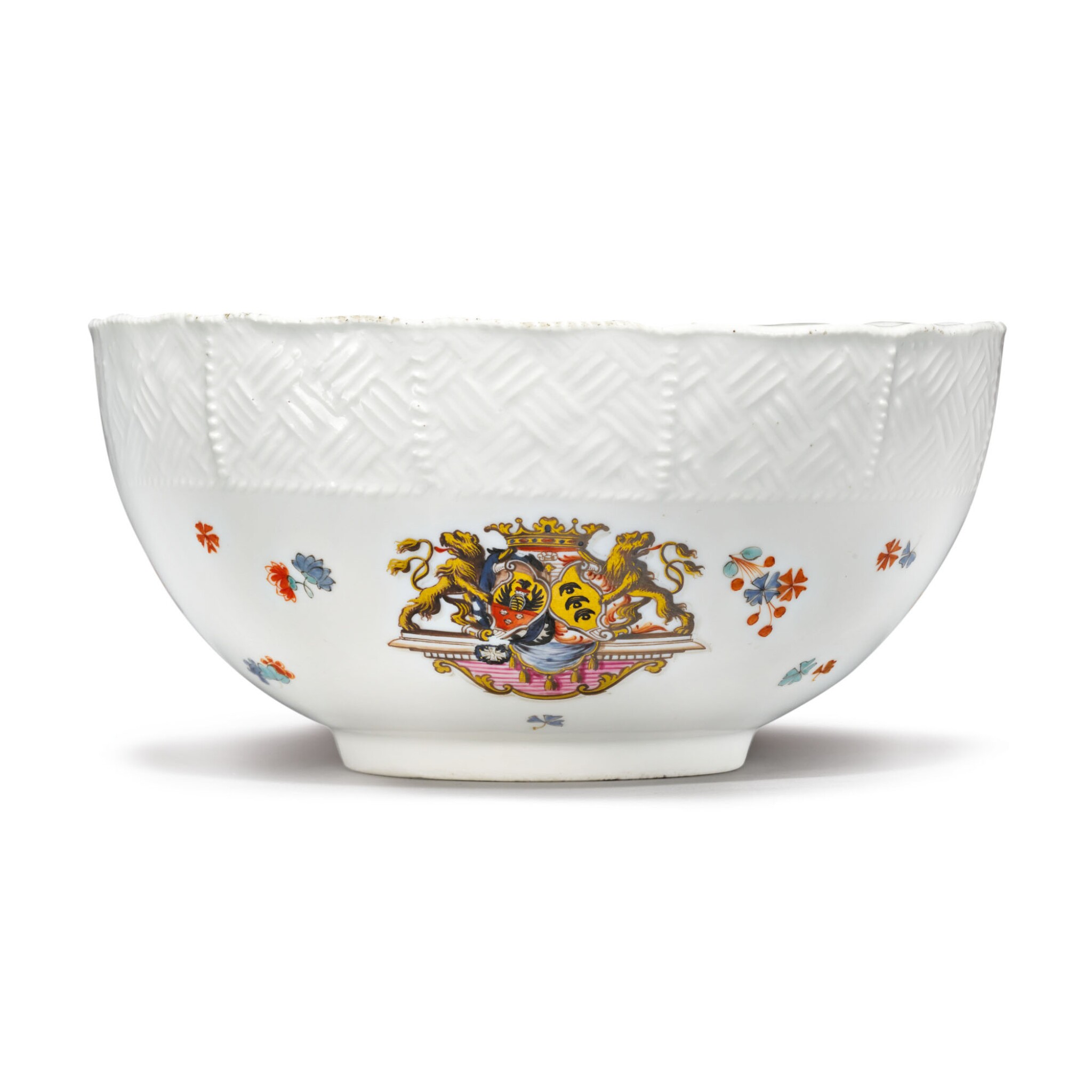 painted with the arms of Graf Alexander Joseph von Sulkowski and his wife Maria Anna Freiin von Stein zu Jettingen, supported by two lions and surmounted by a crown with elaborate mantling, the interior and exterior painted with scattered indianische Blumen within a Sulkowski Ozier-molded border, crossed swords mark in underglaze-blue, impressed Dreher's mark of an asterisk for Gottfried Benjamin (Rückert, 1990, p. 102).

There is a very small shallow chip to the upper rim edge. The rim also has some burst air bubbles and some patches of glaze wear to the ribbed edge. Otherwise in good condition.

Lisa and Heinrich Arnhold, Dresden, by 1930

The Sulkowski service was the first magnificent armorial service to be ordered from the Meissen factory, pre-dating the Swan Service by several years.

Alexander Joseph Graf von Sulkowski (1695-1762) was born into a prominent Polish noble family and would become an influential minister during the reign of Augustus III. He began service in the Royal Court as a page and from 1711, he was raised in the household of the Electoral Prince Friedrich Augustus, the heir of Augustus the Strong. In 1732 he was raised to a count and in 1735 he took command of the King's troops in Poland. He married twice, firstly in 1728 to Baroness Maria Franziska von Stein zu Jettingen (1712-41) with whom he had seven children and whose arms also appear on the service.

In the specification prepared on February 8, 1738 listing the pieces of the incomplete "Sulkowski" service, six Spuhlnäpfe [waste bowls] were listed.

The Sulkowski service was the subject one of the very earliest scholarly monographs on Meissen porcelain, when it was published by Julius Lessing in 1888, 'Das Porzellangeschirr Sulkowski', Kunstgewerbeblatt, Vol. 4, pp. 43-8. Much of the service was apparently sold shortly afterwards, though a large portion was preserved in the family home until it was sold at Sotheby's London, under the designation 'The Property of a Lady of Title', May 23, 1967, lots 29-50.