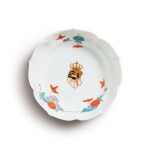 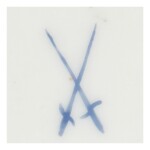 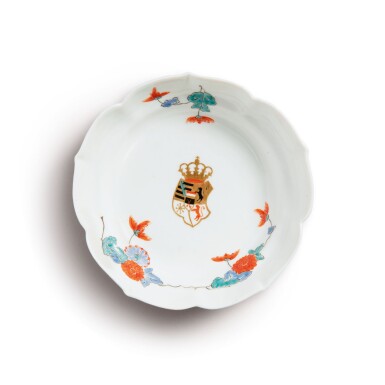 Porcelains of this type, primarily copying Japanese Kakiemon models in the Japanese Palace collection of Augustus the Strong and bearing crossed swords marks in blue enamel rather than underglaze blue, were included in a large order negotiated, circa 1729-30, between the Meissen manufactory's director, the Count of Hoym, and the Paris merchant, Rudolph Lemaire, whose intention it was to offer the pieces for sale in France as their much-in-demand Japanese prototypes. Shortly thereafter, as the King became suspicious of the business arrangement between the Count and Lemaire, Hoym fell out of royal favor and was exiled, Lemaire was detained and eventually deported, and the remaining porcelain in Hoym's townhouse was ordered seized and incorporated into the Royal Saxon collection, where the pieces received their Japanese Palace inventory numbers. A comprehensive explanation and discussion of the entire Hoym-Lemaire affair is provided by Julia Weber, Keeper of Ceramics at the Bavarian National Museum, Munich, in a paper presented at the International Ceramics Fair and Seminar, London, June 16, 2012, 'A detective story: Meissen porcelains copying East Asian models. Fakes or originals in their own right?' and published the following year in the Fair's Catalogue, pp. 41-49. The 1770 inventory of the Japanese Palace lists 'Seven dozen and 8 pieces chocolate beakers, modeled with artichoke leaves... and seven dozen and 1 pieces of the same, saucers',. The decoration is referred to as 'mit bunten Blumen gemahlt', [painted with colored flowers] and does not mention the armorials, Maureen Cassidy Geiger, The Arnhold Collection of Meissen Porcelain 1710-50, Frick Collection, New York, 2008, p. 331. Two further saucers of this type were in the Hoffmeister Collection, illustrated in Dieter Hoffmeister, Meißener Porzellan Des 18. Jahrhunderts Katalog Der Sammlung Hoffmeister, 1999, Vol. II, nos. 341-342.