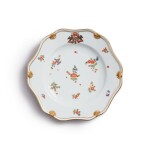 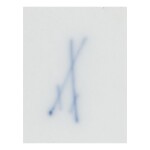 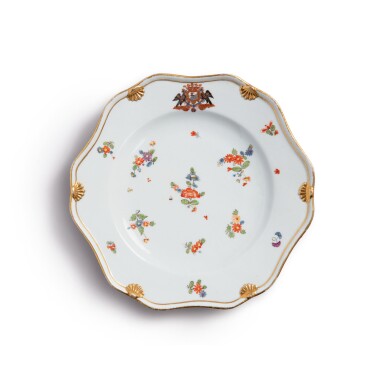 of hexafoil shape, painted with scattered Kakiemon floral sprays and sprigs, the rim molded with five gilt scallop shells and painted at the top with the arms of Podewils beneath a gilt coronet, draped with the Order of the Black Eagle and supported on either side by a crowned black eagle on a gilt escutcheon, crossed swords mark in underglaze-blue, impressed numeral 22, P.1 in gilding to the inside edge of footrim.

Patches of wear and flaked gilding on rim edge. Some retouching to enamels of the flower sprays around the cavetto to cover stacking wear. Otherwise in good condition.

Given by Augustus III of Poland and Saxony to the Prussian envoy, Heinrich Graf von Podewils, probably in 1742 Lempertz Berlin, May 27, 2006, lot 38

Heinrich Graf von Podewils (1695-1760) was a Prussian diplomat, serving early in his career as envoy to Copenhagen (1728) and Stockholm (1729). He negotiated the treaty that ended the First Silesian War and it was in connection with this success that he was awarded the Order of the Black Eagle by Frederick the Great in 1741 on the occasion of a royal visit to Breslau, as recorded in a letter, dated October 12, 1741, by Baron Bielfeld, 1768, Vol. I, Letter VII, p. 63, "...six of the principal Silesian nobility were invested with the order of the black eagle. As a reward for the important service, which M. Podewils, minister for foreign affairs, has rendered his majesty in the course of this war, he was also raised to the dignity of a count and invested with the kings order." Shortly thereafter, von Podewils was assigned to the court at Dresden, where he was presented with the gift of a dinner service decorated with the coat of arms of the Podewils family and the Order of the Black Eagle, writing later, "As of the end of 1741, I was posted by His Royal Majesty to the court of Dresden where, after having successfully accomplished my commission, the King in Poland most graciously made me a gift of a portrait of himself, lavishly set with diamonds, and a costly porcelain table service", Samuel Wittwer in Cassidy-Geiger, 2007, p. 101.

The models for the pieces comprising the service were also employed in the creation of another one, known as the Jagd service, which was commissioned earlier in 1741 by Clemens August, Elector of Cologne, and features the same shapes but differs in the style of the decoration, see Wittwer, 2007, p. 102, for a in-depth discussion on the commissions for and decoration of both services.