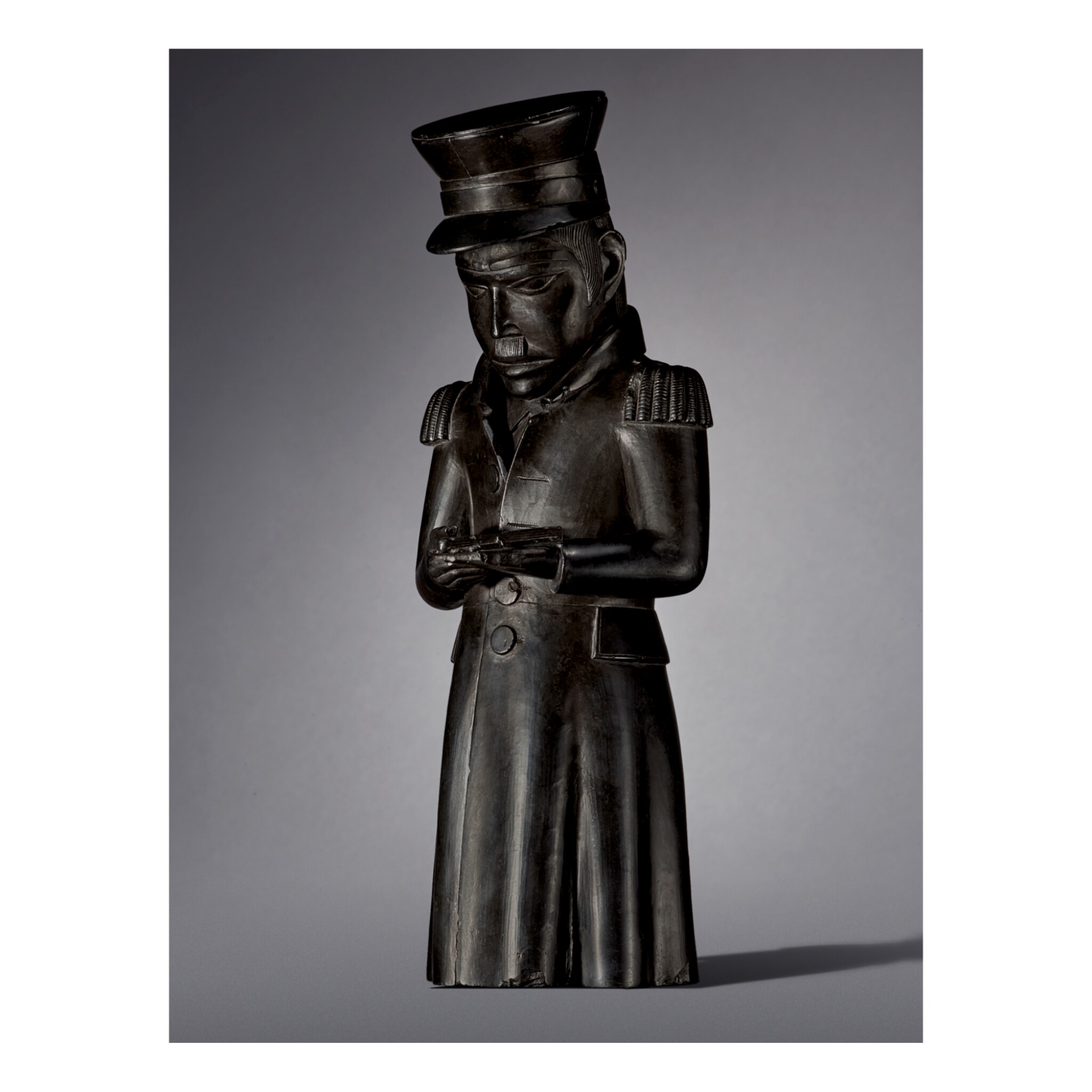 The underside inscribed in red ink: "293"

In good condition overall for an object of this type, age and material. Some minor chips, nicks, and scratches in places throughout, as partially visible in the catalogue illustration, including to the proper left epaulette. Areas of restoration to the center of the brim of the peaked cap, the proper right cuff of the coat, and an area to the lower left of the coat, as well as to a few smaller nicks along the edge of the coat. Some apparent traces of applied black-ish pigment. The figure is missing its legs. The underside drilled for attachment to a modern stand. Underside inscribed in red ink: "293" and with George Terasaki's label inscribed in black ink: "51".

George Terasaki, New York, acquired from the above in 1977

"On a steep, heavily timbered mountainside overlooking Skidegate Inlet in the Queen Charlotte Islands, a vein of fine-grained, dark gray shale, soft enough to cut and carve to a lustrous black finish, has been quarried by Haida carvers for at least one-and-a-half centuries. The material is called argillite, and from it were fashioned some of the masterpieces of Haida art." (Holm, Soft Gold: The Fur Trade and Cultural Exchange on the Northwest Coast of America, Portland, 1982, p. 134).

Bill Holm notes that argillite, which is found only on that particular mountainside, was long used by the Haida "for small carvings such as amulets and labrets" (ibid.), but that the making of more elaborate argillite carvings probably began in the 1820s, when the trade in argillite sculpture developed between the Haida and visiting European and American sailors and traders. Intricate argillite smoking pipes were initially most popular with these foreign visitors, but by the 1830s and 1840s carvings which depicted the visitors themselves formed an increasingly important part of the trade. Perhaps the most famous of these are the "sea captain” figures, small, portrait-like carvings of foreign mariners that were often commissioned to take home to England or the Eastern Seaboard as a memento of travels on the distant Northwest Coast.

Evidently made by a Haida artist of exceptional talent, the present figure is one of the finest and most interesting examples of the genre. It illustrates the remarkable care and attention to detail which is found in the best argillite carving, with particular emphasis placed on the depiction of those aspects of the visitor’s appearance which most marked him out as “other”; as Steve Brown notes, "the carvers of these interesting portraits" had an obvious "fascination for the curious details of the mode of dress and the unfathomable occupations and pursuits of the foreign strangers." (Brown, Transfigurations: North Pacific Coast Art. George Terasaki, Collector, Seattle, 2006, n.p.).

Here the artist’s powers of observation are evident in the attention that he has lavished upon the slightest detail of the figure's attire. The carving is crisp and clear throughout, with the minutest care taken in depicting the stitches of the handsewn buttonholes, the thick, raised seams of the pocket flaps, and the complex pattern of seams at the back of the figure’s heavy frock coat, the skirt of which seems to have caught a gust of wind, its rich, heavy folds rippling. We can sense the artist’s pleasure in carving these fine details, a feeling that the man who commissioned the figure must have shared when he noticed, perhaps, the fine carving of the epaulettes, which rest on the shoulders with a real sense of the weight of the heavy braid, or when he saw how delicately the artist indicated the folds of the lapels, which are pulled up as if to keep out the cold.

As well as the extraordinary care lavished upon these small details, the present figure is remarkable for what Steve Brown describes as “an uncommon sense of drama” (ibid.) in its attitude and posture, which set it apart from the often rigid and hieratic appearance of many other “sea captain” figures. These figures often stand in a rather stiff attitude with their hands on their hips, as they stare straight ahead, as if looking out from the deck of a ship. Here the composition possesses an unusual degree of complexity, and the figure appears altogether more engaged, as his resolute, sharp-featured face gazes intently down at an open book. He holds this in his hands, which have been carved with a high degree of naturalism, the joints carefully indicated. The book rests in the palm and outstretched fingers of the left hand, whilst the right firmly holds a corner of the book, the thumb resting on a page as if to mark a place, or to prevent it from fluttering in the wind. The pages are carved with a scrolling design that evokes a manuscript hand and suggests that the book is a captain’s logbook or journal. Steve Brown remarks that books “must have seemed very curious and strange indeed to members of a culture with no written records. Their importance to, and power over, the educated officers of the military and trading ships have influenced […] the look of deep thought on the subject of this extraordinary sculpture." (ibid.).