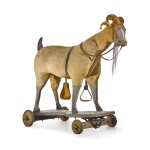 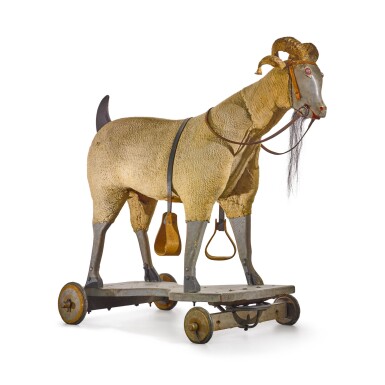 In nice worn condition commensurate with age and use. The woven upholstered hide has overall wear, particularly on the backside; faint staining on the shoulder, and light soiling on the neck proper right side. Slight wear to paint on lower legs and hooves. Abrasions on forelock and minor paint loss near marble eyes and on snout. Replaced leather strap proper right side. Early reattachment of horns. Wooden tail slightly loose.

The myth that fraternal lodge members had to ride a live goat during Satanic initiation rites was first broached in attacks on the Odd Fellows published in the 1840s. However, by the time this singular beast was made, the idea of goat riding had become an inside joke embraced by a number of American organizations, including the Odd Fellows, Freemasons, and Modern Woodsmen of America, and fraternal supply companies offered a variety of unbalanced wheeled mechanical goats used in boisterous lodge pranks.

This is an extraordinary example of a Lodge Goat incorporating realism as well as classic folk art style in the form. The Goat was a central figure in the initiation rite of an aspiring lodge member. This ritual centered upon the moral principle of Trust. The initiate would be blindfolded and with a 'brother” on his left and right side, he would be led into another room of the lodge. Soon he would be astride this "animal" the unpredictable "goat". He could only hold onto the reins and grasp its body with his legs, for the duration of the ride. However, this ride was difficult and frightening because as the goat was pulled, each wheel on the platform, being a different size, would cause much wobbling and a potential fall. Unbeknownst to him, if he did fall, the brothers would catch him. Many of these initiates would pull off their blindfold and in fear and, doing so, he would fail the test Once failed, the opportunity to join the lodge was gone forever. As all these rituals were very secret, no one could be forewarned. Of course, after the successful ride, a great amount of laughter and relief was the reward along with the bond formed with the men and the journey into Lodge membership.

This unique handmade example is far more realistic and complex than the manufactured pieces, which were usually no more than a fur-upholstered seat and toylike goat's head mounted on a wobbly tricycle frame.