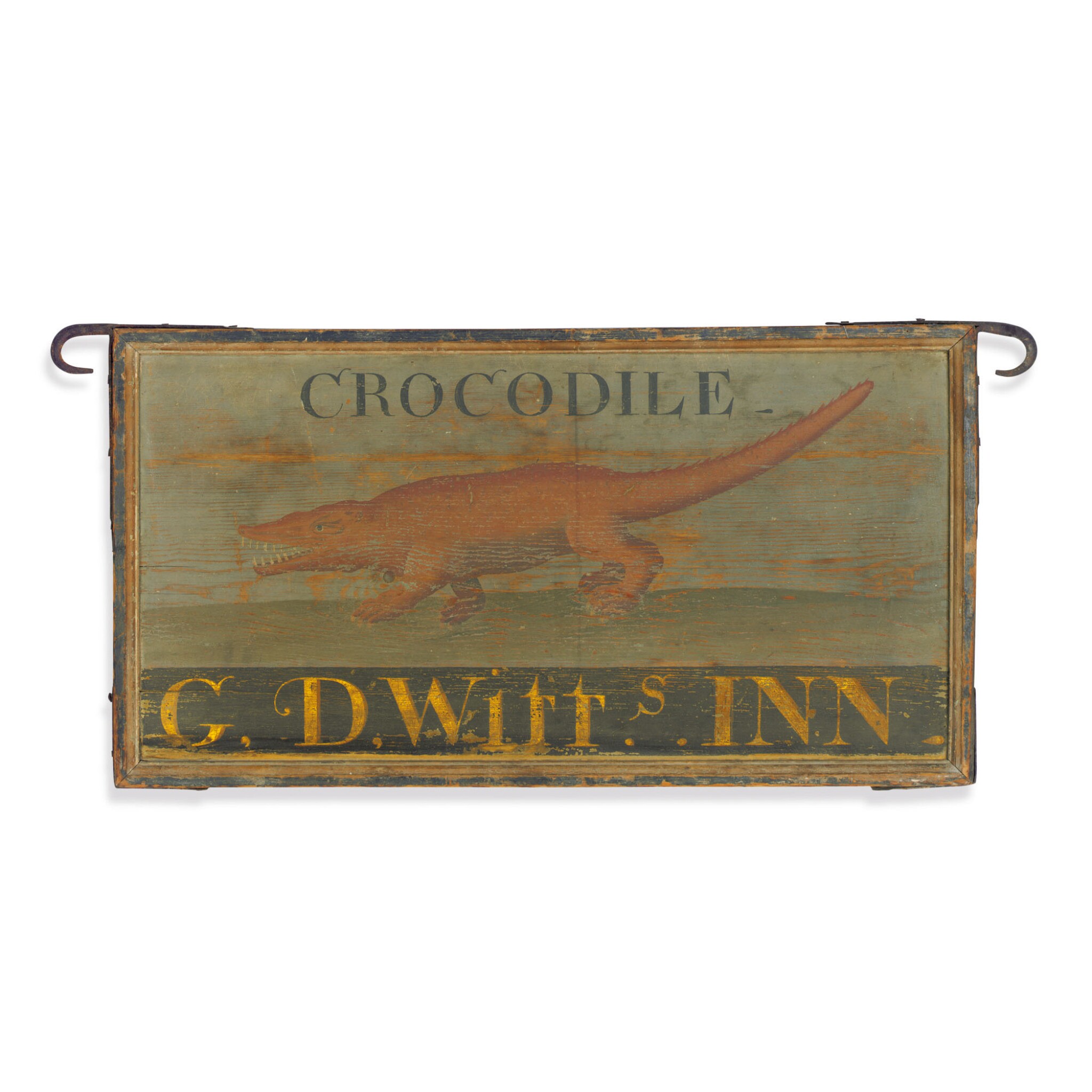 In very fine untouched condition with no signs of inpainting, overpainting, or paint removal. Scattered loss throughout and some water damage along proper right edge commensurate with age and outdoor situ. Drip under "D" of CROCODILE lettering. Additional photos show the scaling pattern that the artist etched into the crocodile's back and tail, likely with the handle end of the brush. Appears to retain original hardware.

More than 200 years ago, the painted wooden sign announcing Garret DeWitt's Crocodile Inn hung in front of the DeWitt family home just south of Kingston, New York, on the road leading from the village of Hurley to the DeWitt gristmill on the Greenkill. The mill which was located immediately across the road from the house, was an important resource for Ulster County both before and after the Revolution. This mill had the special distinction of supplying critical food supplies to General Washington's troops during the Revolution, particularly during the difficult winter at Valley Forge.

The remarkable story of this tavern sign starts with the obvious care and creativity that went into the construction and decoration, both of which remain in untouched original condition to this day. The playful and folky rendition of the crocodile is pure delight. Its dog-like legs look as if they could cover ground quickly. The attached hand wrought iron hardware is elegant in its simplicity and its finishing touches. On the less weathered side, the painted colors, green for the ground, blue for the sky, and reddish brown for the crocodile, remain vivid. The neat lettering is still distinct, both the black "Crocodile" and the gold "G.D. Witt's Inn" which still retains some of its original gilt. The side which faced the weather displays what Jack liked to call "sculpting by Mother Nature." The wood has been differentially weathered depending on the type and amount of paint, resulting in a relief effect on the crocodile image.

It might at first strike one as curious that a crocodile was used as the logo and name for an early American inn, especially one so remote from the crocodile's natural habitat. A little research reveals that as far back as the 17th century in Holland, a stuffed crocodile was the traditional symbol for the apothecary which often doubled as a secretive drinking establishment.1  Considering the Dutch origins of the DeWitt family and the association of the inn with sociable drinking, it is to our considerable delight but little surprise that Mr. DeWitt chose the crocodile for his inn's sign.

The sign, after being hung in front of the inn for a number of years, was brought into the house for safekeeping. In 1911 the Olde Ulster magazine wrote, "The quaint sign, bearing the picture of a crocodile, is preserved at the house, which was called 'The Crocodile Tavern'."2 Another direct reference to the sign is in a 1929 book Dutch Houses in the Hudson Valley Before 1776: "In the attic in 1925 was still preserved a painted signboard, exhibiting a crocodile in the center between the words: Crocodile (above) and G. DeWitt's Inn (below), the sign being a reminder of the period when the road past the house was on the stage-route between Kingston and Ellenville."3

In 1911 the house was still in the DeWitt family and owned by Charles Richard DeWitt, a grandson of Garret. By 1925 it was owned by Charles' son Richard Ten Eyck DeWitt. In a fortunate twist of fate, the sign was removed from the house within the next five years to the house of another local DeWitt family member. This was indeed fortunate because the original Crocodile Inn house burned in 1930. In 1935, the New York State Education Department placed historical markers at the site of the Crocodile Inn and at the site of DeWitt's grist mill across the road. The road is still known today as DeWitt Mills Road.

The first time the Crocodile Inn sign was offered for sale was in October 2004 at JMW Auctions, Inc., in Rosendale, NY, just a few miles down the road from where the sign had hung 200 years before. There it was won by a thrilled Mr. Whistance. Jack always felt privileged to own this amazing survivor which so charmingly evokes our ancestors' way of life and represents a place that played an important role in our republic's earliest history.

This brings us to the second part of our story which is actually a flashback to colonial times - how it came about that the DeWitt home, the home that was to become the Crocodile Inn, and its associated gristmill played a part in the American colonies' successful revolt against British domination.

The House, the Mill, and the DeWitt Family

In 1736, Johannes DeWitt, whose great grandfather had emigrated from the Netherlands to New Netherlands (later New York) in 1657, built a stone house in the Dutch style along the road leading from Kingston to Hurley. Johannes' son, Col. Charles DeWitt, built a grist mill on the Greenkill creek across the road from the house. This mill was a landmark until it was succeeded in 1849 by a new mill-building. Col. Charles was the father of Garret DeWitt who converted the family homestead to the Crocodile Inn.

Charles was considered to be Ulster County's leading statesman of the revolutionary war period. He was colonel of a regiment of minutemen at the opening of the war. His list of influential political positions is a long one: Colonial Assembly, 1768-75; Provincial Convention, 1775; Provincial Congress, 1776-7; voting to ratify the Declaration of Independence for New York; First Convention of State of New York and committee which framed the state constitution; Council of Safety, 1777, which was responsible for governing New York after the state constitution was approved but before a Governor and Legislature were selected; Continental Congress, 1784; State Assembly 1781-5, and 1787.4 Following Charles, three other DeWitt family members became Ulster County's representatives in Congress, and eight others represented the county in the state legislature.5

Col. DeWitt's home and mill were frequented by many prominent men of the time - John Jay, once governor of New York and Chief Justice of the United States; Col. DeWitt's intimate friends Chancellor Robert R. Livingston and Robert's brother Philip Livingston, a signer of the Declaration of Independence; and Governor George Clinton, who sat on the Provincial Assembly and Congress with Col. DeWitt. The DeWitt home was often selected by the "Committee for Detecting and Defeating Conspiracies against the Liberties of America" as the place where prominent royalists were to report after being given parole.6

The Greenkill was one of the few creeks in the area which flowed freely all winter, being supplied by a deep spring-fed lake. "...the ever-flowing stream that issued from the First Binnewater [Lake] to urge the mill-stones to never-ceasing labor when drought or shortage of crop stopped others, was such a blessing to half starving troops and perplexed providers that the Greenkill [DeWitt] mills were known through the whole patriot army."7 DeWitt's Mill was operating even during the bitter winter of 1777-78 when General Washington's troops were suffering greatly at Valley Forge. Governor George Clinton offered help by urging farmers in Ulster County to take grain to DeWitt's Mill to be ground into flour for the hungry troops. The fertile floodplains of the Esopus creek near Hurley were an important source of grain. Thus the mill on the Greenkill became well known that winter and during the succession of severe winters that followed. Even after the Revolution, the superfine flour ground there was preferred by Martha Washington and was ordered for her personal use.8  On the morning of Nov. 16, 1782, General Washington stopped in Hurley on his way from West Point to Kingston, NY, and thanked the people of the town for providing food to his army at Valley Forge five years earlier. There is a state historic marker at the old stone house in Hurley where Washington stopped that day.9

Garret DeWitt, son of Col. Charles, opened the house as the Crocodile Inn around 1800. "It provided lodging and entertainment for those who came long distances and remained until the following day, to depart with the flour made from the grain they had brought from their farms to Greenkill Mills."  One can well imagine the bustle of activity that must have surrounded the Crocodile sign as it hung in front of that old stone house in the early decades of our new republic.

3 Reynolds, Helen Wilkinson; Dutch Houses of the Hudson Valley before 1776; Dover Publications, Inc., New York, reprinted in 1965 from the 1929 version. A publication sponsored by a special committee of the Holland Society of New York, Franklin D. Roosevelt, chairman.

4 Brink, Benjamin Myer; address given in the year 1911, at the dedication of a granite marker for Col. Charles DeWitt's grave in the Old Hurley Cemetery; reprinted in local newspaper; clipping on file at the Senate House State Historical Site Museum, main archives, folder 2242, doc.#9505.