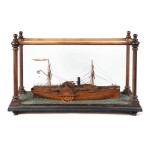 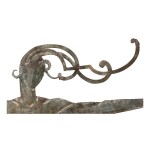 together with a framed typewritten description. (2 pieces)

Star of the West was an American civilian steamship that was launched in 1852 and scuttled by Confederate forces in 1863. In January 1861, the ship was hired by the government of the United States to transport military supplies and reinforcements to the U.S. military garrison of Fort Sumter. A battery on Morris Island, South Carolina manned by cadets from the South Carolina Military Academy (now The Citadel) fired upon the ship, effectively the first shots fired in the American Civil War.

The ship was later captured by Confederate forces, then used for several purposes including as a hospital ship and a blockade runner, and finally scuttled in defense of Vicksburg in 1863.

Charles Fulwood was the Star of the West's carpenter. He made this model while working on the ship while it was docked at William H. Webb's shipyard in New York.