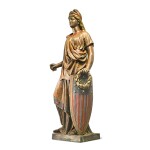 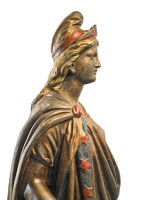 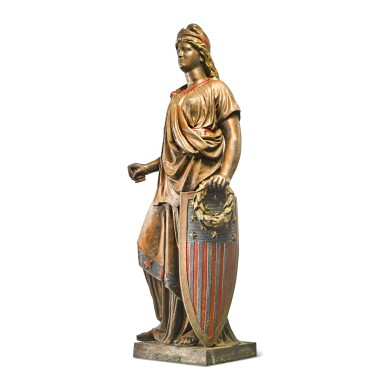 this example likely once held a sword.

Libertas, the Roman goddess of freedom, was adopted as a symbol by American revolutionaries such as Paul Revere and Thomas Paine and became one of this country’s most enduring symbols, depicted on currency and stamps as well as in paintings and sculptures. A 19½-foot tall bronze sculpture of Freedom was placed on top the dome of the US Capitol in 1863, and she found her ultimate expression in Frederic-Auguste Bartholdi’s 151–foot tall Statue of Liberty, erected in New York Harbor in 1886. Statues of the Goddess of Liberty were very popular in the second half of the nineteenth century, and every American purveyor of metal statuary offered one or two variations on the theme, which were placed inside and outside patriotic and fraternal organizations, in public buildings, and used as ornaments on the pilothouses of ferries and steamboats. J. L. Mott introduced its six-foot, four-inch Goddess in 1871, which sold for $180.