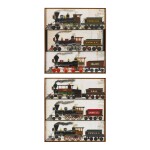 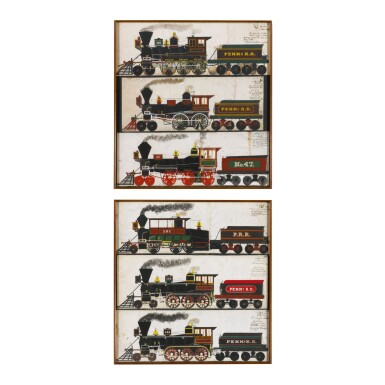 Gouache and ink on paper. (4 pieces)

This collection of four paintings depicts eleven Pennsylvania Railroad locomotives and tenders, (i) engine No. 131, No. 153, No. 152, (ii) No. 279, No. 70, No. 49, (iii) No. 191, No. 16, No. 47, (iv) No. 168, No. 217. The eight examples are signed C.H. Caruthers and each is numbered with copious ink inscriptions identifying dates and locations of where engines were built and painted as well as restored on the verso. A colored drawing by Caruthers on the reverse side of the middle painting depicts a man waving a banner reading McClellan and Pendleton, gouache and ink on paper, in contemporary distressed frames.

C. H. Caruthers was superintendent of the car department of the Westmoreland Coal Co. at Irwin, Pennsylvania. He published a detailed article on "Early Baldwin Locomotives on the Pennsylvania Railroad" in 1898 and is cited in Joseph Snowden Bell’s 1912 book The Early Motive Power of the Baltimore and Ohio Railroad as being “familiar with the camel engines of the Pennsylvania Railroad…[He] has made a very full and interesting set of drawings of them, both in their original form and as rebuilt by John P. Laird, at Altoona, Pa.”