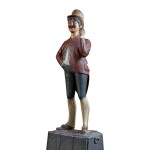 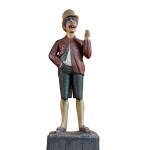 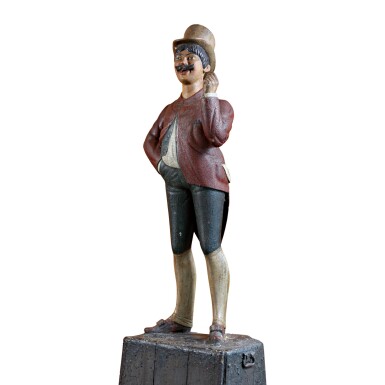 Depicting a man in top hat and tails standing on an integral base.

In overall very fine condition. The surface with various campaigns of historic paint that were exposed to heat at one point in time. Craquelure in the face and white shirt are commensurate with age. Examination under ultraviolet light showed old repair of hat brim. Proper left arm reattached at elbow. Small loss above proper right knee. Minor stabilization of coat tails and cracks in feet.

Dowler was born in Birmingham, England, and immigrated to the United States in 1863 as a gunsmith. After the Civil War's end, he became a sculptor and woodcarver. Industries and Wealth of the Principal Points in Rhode Island, 1892, states that his "operations consist largely in carvings, modeling and chiseling in plaster; executing any kind of design for interior and exterior decorations; also models for monumental workers or stone workers to copy from." Today he is best known for the Collyer Monument in Pawtucket, Rhode Island, and the John Sparks Monument in Bristol, Rhode Island. His house, the Charles Dowler House, is listed on the National Register of Historic Places.

A Rhode Island sculptor, woodcarver, and decorative carver, Charles Parker Dowler lived and worked in Providence. A 1980 report by the Rhode Island Historical Preservation and Heritage Commission identifies Dowler as a gunsmith who arrived in Providence in 1863 from Birmingham, England, to produce arms for the American Civil War. An entry in Industries and Wealth of the Principal Points in Rhode Island, dated 1892, lists Dowler as a sculptor with twenty-seven years of practical experience, and with studios on the third floor at 45 Eddy Street in Providence. The entry characterized him as “the olde established sculptor in Rhode Island,” whose “operations consist largely in carvings, modeling and chiseling in plaster; executing any kind of design for interior and exterior decorations; also models for monumental workers or stone workers to copy from.” An extant visiting card reads: “Charles Dowler, Carver and Modeler. Ornamental Designer. All kinds of carving for furniture and house in the latest style of the Art. Modelling of centers, and all kinds of Stucco work. No. 49 Peck Street, Providence.”

Dowler is also known for the decorative carvings he produced for Providence’s “Narragansett Hotel, inside and outside.” His acclaimed wood and plaster carvings were also prevalent in his residential architectural, decorative, and construction commissions, produced for both himself as well as several owners of Providence’s most notable mansions. In 1867 he designed and built in Providence his first home, at 83 Camden Street, and, in 1872, his next home, at 581 Smith Street, which was highlighted by “richly detailed exterior articulation, including fish-scale shingling on the roof, incised Eastlake detailing on the dormers, an oculus window in the mansard, imaginative Corinthian colonettes on the porch.” A home designed and built by Dowler for Charles Kelly in 1875 sported a gable roof, two-bay facade, hooded entrance, and a “diamond-pattern jig saw cornice,” with “bold hoods over the side and attic windows.” By the end of the nineteenth century he advertised himself as a “designer of interior and exterior decorations, models for monumental works, and patterns for jewelry.” Upon Dowler’s retirement at the age of seventy-eight, in 1919, he took up painting.

In the folk art field, Dowler is recognized as a woodcarver of shop figures, particularly “Dudes” or “Sporting Dudes,” also referred to as “Race Track Touts,” takers or fixers of gambling bets. Only one confirmed carving of a tout by Dowler, owned by a Connecticut collector in 1937, is known. It was the basis for a 1937 rendering in the Index of American Design, the federal art project begun in 1935 by the Works Progress Administration that published this visual archive of 1,900 pieces of American folk art. Boldly painted, the tout’s features and costume are meticulously carved. It portrays a young, mustachioed gent sporting a top hat, wearing a high collared shirt and girded in tight pants and jacket, with his right hand jauntily inserted in his right pocket and his left hand raised as if holding a lighted cigarette or cigar, with other smokes apparent in his left breast pocket. Incorrect Dowler shop-figure attributions have resulted from a misleading caption attached to a photograph of a racetrack tout, purporting to be a Dowler, in Frederick Fried’s (1908–1994) book, Artists in Wood.