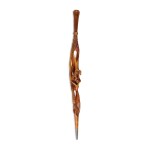 In overall very fine condition. Negligible wear to handle and brows of alligator, monkey, and antlers of antelope. hairline crack in inner pierced area of wood.

Michael “Mike” Cribbins was born in Ireland, immigrating to America via the port of Boston at age thirteen. By 1860, he was living with his family in Kenockee, Michigan but soon thereafter he enlisted in the 7th Michigan Infantry, which saw considerable action during the Civil War. Later, he moved to Orion, Michigan, the town most closely associated with him today, thanks to his inclusion of the place name on many of his carved canes, axes and other wooden objects.

Like many men of his generation, Michael Cribbins began carving during his service in the American Civil War. Cribbins was wounded at Fredericksburg in May of 1863 and hospitalized at Point Lookout, Maryland where he began his creative production. Later in life, he was described as still having “a number of the trinkets he whittled during that time, which he cherishes as reminders of the old days.” Most of his post war carvings contain symbolic or text references to his regiment, and several were presented to his fellow veterans. Cribbins attended regimental reunions for the rest of his life, even serving as a representative of his company.

Cribbins whittled many of his canes from diamond willow wood. The term does not refer to a particular species of willow but, rather, to the diamond-shaped cankers, or cavities, that were formed by the growing tree in reaction to an attack by --- it is thought --- a fungus. Such deformations are commonly found in several species of willow, particularly Salix bebbiana (but similar reactions have also been noted in Quaking Aspens). Several diamonds appear in this cane, each artfully incorporated into the overall design. It appears that Cribbins sold some of his canes but made others as gifts for friends.