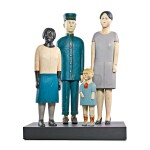 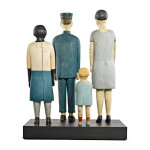 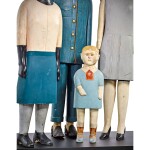 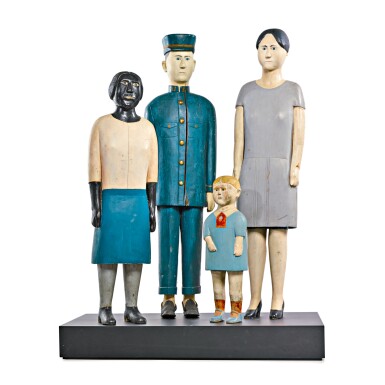 Estate of the artist;

The Buckeye Family is one of the most famous carvings in America as well as an icon in the field of American folk sculpture. Greengrocer Joseph Cummings Lee (1862-1941) of Overton County, Tennessee carved the four figures in about 1925. The Buckeye Family took three years to carve, and according to records kept by Mr. Lee, “over 65,000 people from every state in the Union and fifteen foreign countries visited his store in the mountains to view the carvings. Pictures of The Buckeye Family have appeared in several daily newspapers in Tennessee and sixteen national magazines.” The figure of the little girl, called Shelby Jean, was Mr. Lee’s favorite, and he referred to her in a very personal and human way. The figures recorded American popular culture of their time for future generations to appreciate.

At the turn of the twentieth century, the tiny town of Beaver Hill, Tennessee, located 100 miles east of Nashville, consisted of just a post office and general store, both of which were managed by Mr. Lee. According to oral tradition, Joe Lee’s artistic career began when a young boy came into the store and asked him to “improve” a hand-carved wooden doll he had been given. Lee found he enjoyed working with wood, and he soon began carving a group of nearly life-size figures. After three years of work with only an axe, pocket knife, sandpaper, and paint, he had created what he called “The Buckeye Family”, named after the native wood from which the figures were carved. The family consisted of a uniformed Mr. Buckeye, his high-heeled wife, their little girl, whom Lee called Shelby Jean, and a nanny. Lee put the group on display in his store, where it drew local and eventually national attention. He put out a visitors’ register, which was signed by some 65,000 people over the years, and is reported to have said, "When art people came to see my figures, I felt small and wanted to crawl under the store, but way before they were gone, they made me feel like I am somebody."