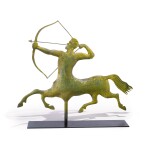 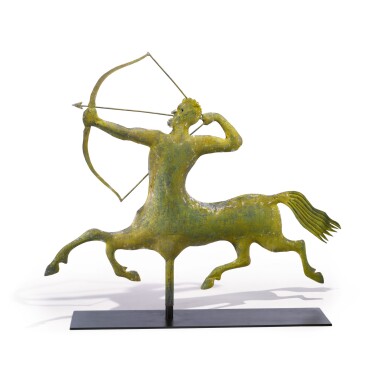 Please note this lot is sold with an accompanying wooden pedestal.

Several other 'Archer' centaur weathervanes have survived, suggesting that the subject was fairly popular in the second half of the nineteenth century. An example by the same maker is in the collection of the Shelburne Museum in Shelburne, Vermont.

Half man and half horse, the mythological centaur personifies man's dual nature. Embodying the conflict between instinct and intellect, he epitomizes masculine strength and aggression while at the same time he possesses divine wisdom and knowledge. In ancient Greece, the most celebrated centaur was Chiron, a great and wise teacher who had himself been instructed by Apollo and Artemis. As a constellation and the ninth sign of the zodiac, he is Sagittarius.

This centaur was probably made by A.L. Jewell & Company. An innovator in the development and marketing of three-dimensional copper weathervanes, Alvin L. Jewell founded his company in Waltham, Massachusetts, in 1852. In addition to creating many distinctive designs, he seems to have been the first to issue illustrated price lists for mail orders. Although he died prematurely, in June 1867, his business practices provided a model for many of the weathervane makers who followed him. The attribution of this weathervane and similar examples is complicated by the fact that Jewell was succeeded by Cushing & White in 1867, which became L.W. Cushing & Sons in 1872. The Cushing Company continued to produce weathervanes from Jewell's patterns while also creating new types.