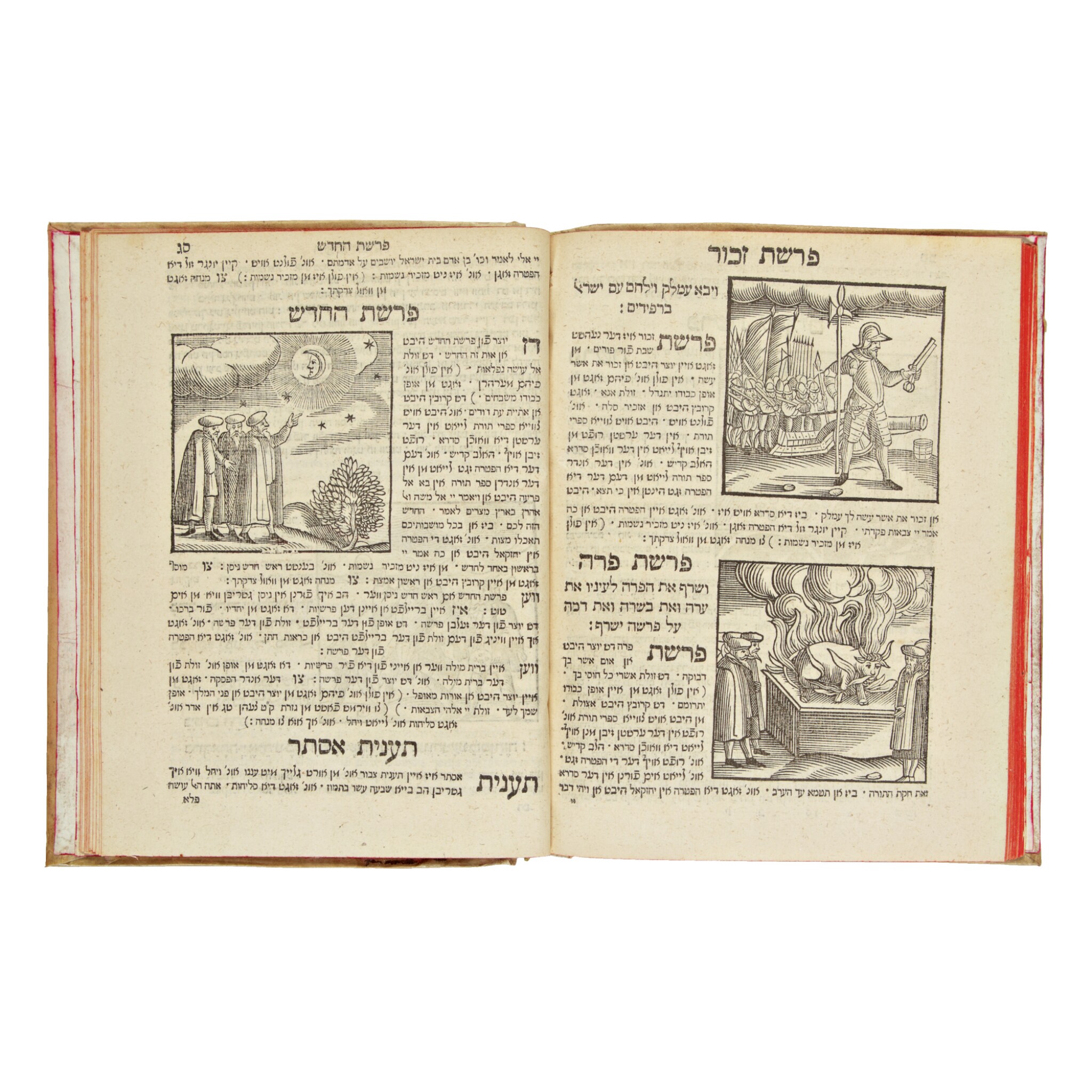 The first edition of this encyclopedic and oft-reprinted work.

Immanuel (or, as he wrote it, Imanoel) Benveniste (ca. 1608-1664), a descendant of Iberian conversos, came to Amsterdam from Venice and there began printing in about 1639. By the time he closed his business two decades later, he had issued at least forty-eight Hebrew and six non-Hebrew editions, whose excellent quality won him great renown in the Hebrew publishing world, superseding even that of the incomparable Menasseh Ben Israel. The present lot is a copy of one of the titles Benveniste produced.

Rabbi Isaiah ha-Levi Horowitz (ca. 1565-1630), a native of Prague who moved to Poland in his youth, studied there under some of the most eminent scholars of the day and quickly gained a reputation for his own exceptional learning. After serving Jewish communities in Dubno, Ostrog, Frankfurt am Main, and Prague, he moved to the Holy Land in 1621, becoming the head of the Ashkenazic community of Jerusalem. Before leaving the Diaspora, he began working on his magnum opus, Sefer shenei luhot ha-berit (The Two Tablets of the Law), completing it about two years after his relocation. Intended originally for his family and their descendants, the work was published posthumously by his son Rabbi Shabbetai Sheftel (ca. 1590-ca. 1660) once he read in his father’s introduction that it could be made available to Horowitz’s students. “Then I said in my heart: since it was permitted to some, it has been permitted to all of Israel, for his students have dispersed throughout almost the entire Diaspora.”

The book takes as its main organizing principle a verse from Proverbs (6:23): “For the commandment is a lamp, the teaching is a light, and the way to life is the rebuke that disciplines.” These three phrases are interpreted to refer to halakhah, Kabbalah, and ethics, respectively. Sefer shenei luhot ha-berit addresses each topic at length over the course of three ten-part chapters (with various appendices) entitled Ba-asarah ma’amarot, Aseret ha-dibberot, and Asarah hillulim. The volume closes with a(n unrelated) six-part ethical-homiletical treatise penned by the younger Horowitz entitled Hakdamat sefer vavei ha-ammudim, whose name was meant to echo the Sefer ammudei shesh (Prague, 1617) of Rabbi Solomon Ephraim of Luntshits (1550-1619).

Sefer shenei luhot ha-berit (also known by the acronym Shelah) achieved enormous popularity (see lot 85), especially in its epitomized form, Kitsur shelah, which has gone through numerous editions since it first appeared in Fürth in 1693. Horowitz himself came to be referred to as “The Holy Shelah” on account of the high esteem in which this sacred book was held. The work was particularly influential among early Hasidic masters like Rabbis Israel Ba‘al Shem Tov (ca. 1700-1760) and Shneur Zalman of Liadi (1745-1812) and continues to be studied and revered down to the present day.

Marvin J. Heller, “The Printer’s Mark of Immanuel Benveniste and Its Later Influence,” Studies in Bibliography and Booklore 19 (1994): 3-20.