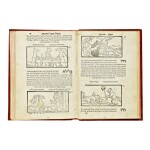 Meshal ha-kadmoni, by Rabbi Isaac Ibn Sahula (b. 1244), is an illustrated collection of moral fables and animal stories in rhymed prose interspersed with verse. Ibn Sahula, a scholar, physician, and kabbalist, writes that his material is original but based on the Talmud and midrashim and that in style he has followed the example of the prophets who presented moral lessons in allegorical form. In composing this work, one of his goals was to demonstrate that Hebrew was as suitable a vehicle for conveying ethical teachings as Arabic. The stories themselves betray both kabbalistic and Indian influence. Eighty woodcut illustrations (some of them repeats) grace the leaves of this book, with an average of one or two captioned images per folio. Though modeled on the program of illustration of the incunable editions (Brescia, ca. 1491; Italy, ca. 1497), the present imprint, issued by Meir ben Jacob Parenzo, features an entirely new series of woodcuts providing greater detail and artistic sophistication.