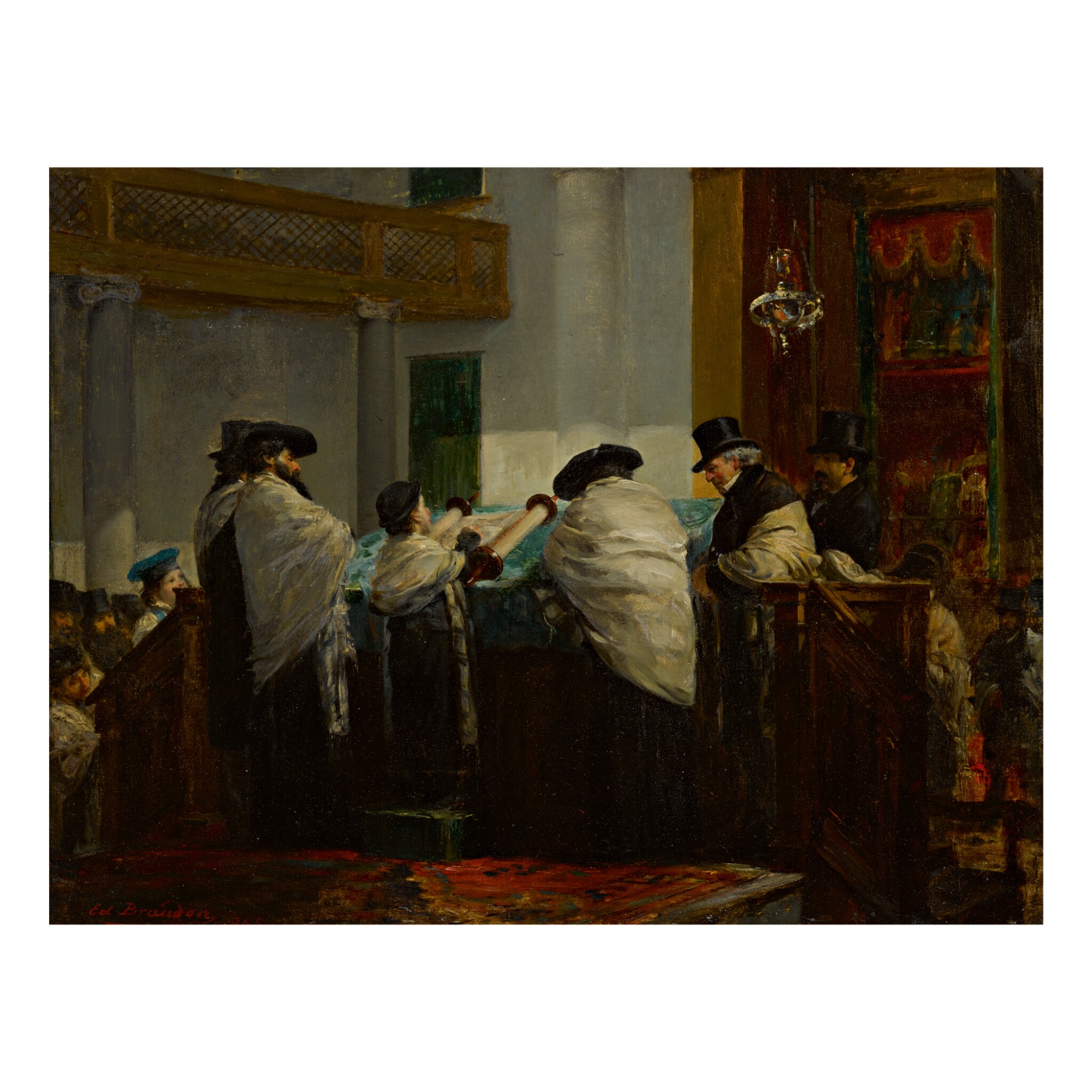 This work is painted on a panel which has a cradle on the reverse. It has been retouched and varnished. The retouches are poorly matched and applied. They are clearly visible under ultraviolet light in and below the balcony in the upper left, in the two standing figures on the left, and in the group of figures on the far left. The figures in the center and right side are mainly well preserved, with only a few spots of retouching in the white robe of the figure on the right side and in the group on the far right. There are also a few spots in the wooden staircase on the right. The varnish has a sprayed texture on the surface. If the varnish is removed and replaced with a clearer more saturating varnish, the image would gain clarity. The work could be hung in its current state, but re-examining the restoration would certainly be beneficial.

Jacques-Emile-Édouard Brandon, who was also known as Jacob Émile Édouard Péreira Brandon, was born to a wealthy Sephardic Jewish family. Like his German contemporary Moritz Daniel Oppenheim, Brandon reached the highest level of academic training and was able to undertake an extended trip to Italy, both of which eased his path into the established artistic circles of the day. By publicly establishing himself as a major Jewish painter in France, Brandon opened the doors for a younger generation of Jewish artists who followed.

At the École des Beaux-Arts in Paris, Brandon studied under Jean-Baptiste-Camille Corot and the two artists remained friends for the remainder of Corot’s life. Between 1856 and 1863, Brandon lived in Rome, where he made the acquaintance of Edgar Degas. Returning to France in 1863, he exhibited a series of paintings on the theme of Christian piety at the annual Salon, following the example of Isidor Pils and François Bonvin. In the later 1860s Brandon’s work shifted to Jewish scenes, mainly interiors of synagogues and religious schools, and in 1867 his painting The Portuguese Synagogue at Amsterdam received the coveted Prix du Salon. Brandon later exhibited in the first Impressionist exhibition in 1874, continuing to favor themes of Jewish observance and the education of the young. By choosing these themes, Brandon was following a highly regarded subject among artists of the Second Empire, which emphasized the importance of schooling and religious instruction in France. So too did these works reflect the centrality of study and education in Jewish life. In his paintings Brandon “showcased the mores of the community by showing how young boys attended school and recited their lessons…. Training for young boys was at the core of Jewish life” (The Emergence of Jewish Artists in Nineteenth Century Europe, ed. Susan Tumarkin Goodman, exhibition catalogue, The Jewish Museum, New York, 2002, p. 147).

The magnificent Bar Mitzvah scene offered here captures one of the most significant moments in the Jewish life cycle. Called to the Torah for the first time, the Bar Mitzvah boy is shown facing towards the Holy Ark, before which hangs the Eternal Light. The coloration of the painting reinforces an atmosphere that is at once solemn yet joyous. The burnished red floor contrasts with the brilliant turquoise reader’s desk cover. Standing on a raised step, the Bar Mitzvah boy in his long Tallit is surrounded on each side by dignified and attentive elders who follow every word. Behind the reader’s desk, one of the boy’s classmates, in the traditional blue cap which appears in a number of Brandon’s other paintings, rises to obtain a better view of the proceedings, perhaps envisioning his own Bar Mitzvah in a few weeks’ time.