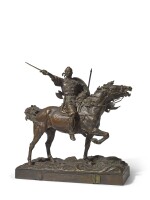 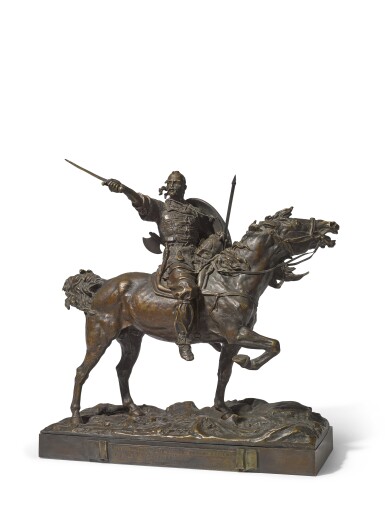 The bronze sculpture depicting the Grand Prince of Kiev Sviatoslav Igorevich was one of the last models designed by Evgeni Lanceray (1848-1886) before his premature death at the age of 37.

A nation forever seeking its identity between West and East, old and new, 19th century Russia was looking back to its history and to the heroes of old times. The Prince of Kiev was known for his military talent and outstanding bravery, which resulted in a significant territorial expansion of the Kievan Rus’ back in the tenth century. Almost a thousand years later, Sviatoslav’s campaign in Bulgaria was repeated by another great Russian warrior, Alexander II, who fought against the Ottoman Empire over the Balkans.

Throughout his career, Lanceray worked extensively on historical subjects and created a series of sculptures on the 1877–1878 Russo-Turkish War. In this powerful bronze, the sculptor masterfully caught the fierce temper of the Prince whom Nikolay Karamzin called “Alexandre the Great of ancient Russian history.” His open arm holding the sword, the twist of his torso and the impatient horse tossing its head create a dynamic composition which inevitably engages the viewer in this demonstration of bravura and determination.