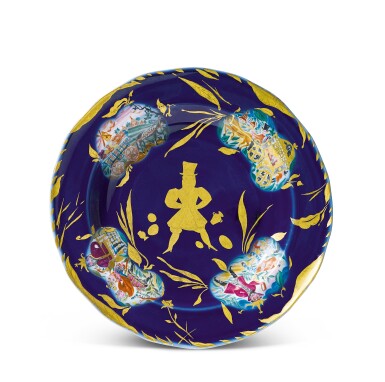 after the design by Alexandra Shekatikhina-Pototskaya, the vivid cobalt grounds decorated with four cartouches

Overall in very good condition, with minor stacking wear, as expected. The gilding on the edges with some rubbing. A minor pin-head sized firing flaw on the reverse edge of the plate.

Alexandra Schekatikhina-Pototskaya (1892–1967) was a visual artist of many genres: painter, illustrator, set and costume designer. However, her landmark works were undoubtedly created in the porcelain workshops of the State Porcelain Factory which she joined at the invitation of Sergei Chekhonin in 1918.

Her upbringing in the family of Old Believers and the influence of her icon painter grandfather sparked the artistic fire that would brightly burn throughout her life. Later, as a student of Nicholas Roerich and Ivan Bilibin, she soaked in their romantic imagery and love of folklore, while in the studios of Maurice Denis, Paul Sérusier and Félix Vallotton she developed her colouristic and ornamental feeling. Schekatikhina’s talent in decoration brilliantly matched the Revolutionary pathos of early Soviet porcelain. In her plates and tea sets, the restless energy of avant-garde is masterfully coupled with the refined aesthetics of Mir Iskusstva. Each object painted by Schekatikhina-Pototskaya reveals a profound visual reflection, be it a nostalgic story of Russian tradition or a reaction to the ground-breaking modernity of the new Soviet State.