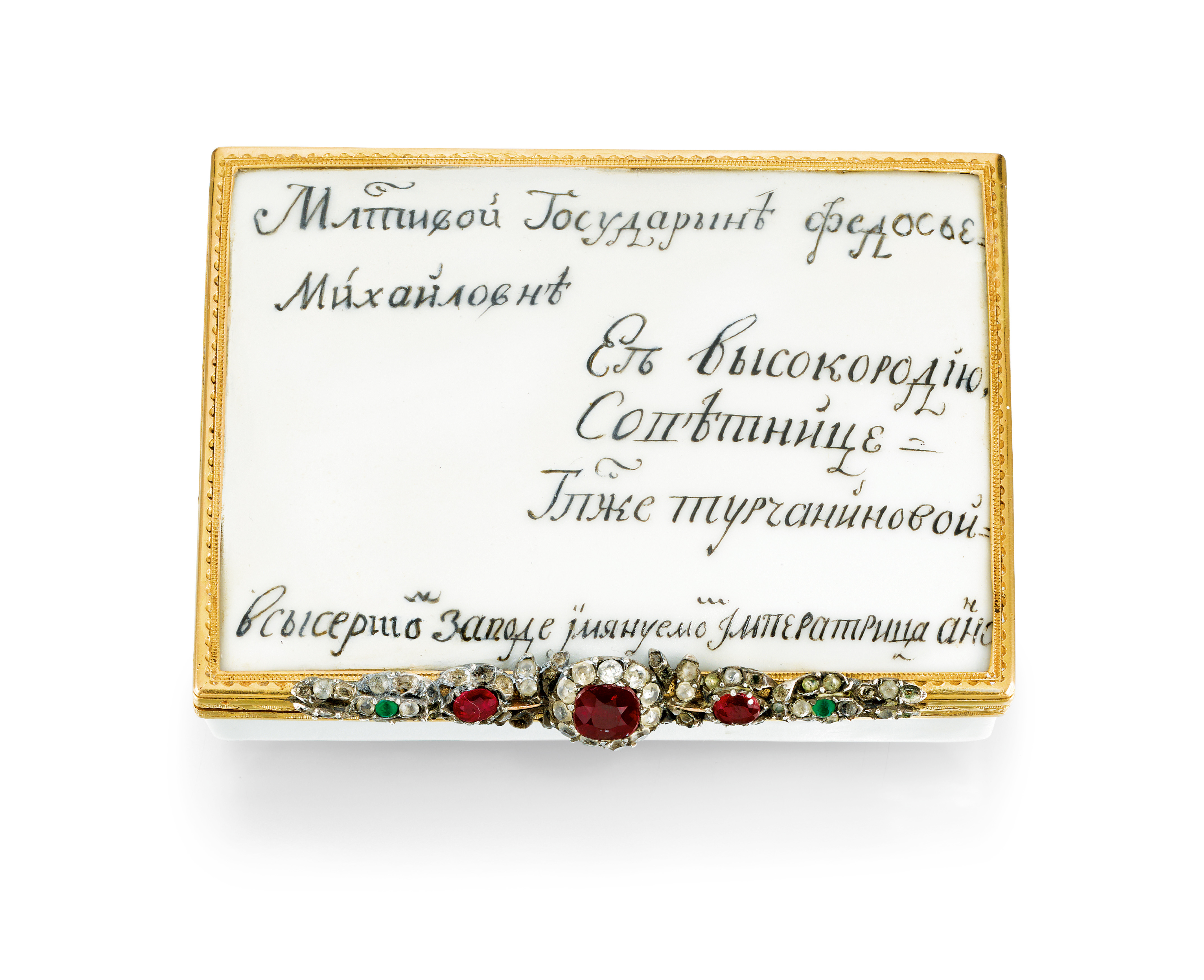 the lid inscribed with a dedication to Fedosia Mikhailovna Turchaninova, framed with a silver-gilt mount, the

depiction of a female head in imitation of a wax letter seal, unmarked

Overall in very good condition; the lid with several areas of professional restoration. The mount likely a later addition and has been welded on.

Produced in the first decades since the inception of the Imperial Porcelain Factory, this rare envelope is an elegant intertwining of established European and emerging Russian porcelain traditions. Although originally conceived in Western Europe, Russian envelope-shaped snuff boxes were more faithful to the epistolary theme, presenting inscriptions with the names and addresses on the lid as well as red stamps imitating the wax seal on the reverse. Quite probably, these boxes would hide a letter inside when they were sent to their receivers as gifts, creating a playful pun. The inscriptions on the lid would be stylized to look like the actual hand writing of the sender, which would have made the gift even more personal and endearing. Another particularity of Russian snuff boxes was that they were made of porcelain rather than enamel, the latter being more commonly used in the European tradition. One of the reasons for this was the foundation of the Imperial Porcelain Factory in St Petersburg in 1744, which quickly gained a reputation for creating refined pieces such as this one.

Envelope-shaped snuff boxes from the Imperial Porcelain Factory were commissioned by private patrons, and each example was carefully documented in the factory’s registers. The box from the collection of Vladimir Nikolayevich Argutinsky-Dolgoruky (1874–1941), a Russian art historian and collector, was addressed to a “gracious Fedosia Mikhailovna, honourable titular counsellor Madam Turchaninova at Sysert plant of the Empress Anna.” Fedosia Mikhailovna Turchaninova (1722–1763) was a daughter of a wealthy owner of saltworks in Solikamsk near Perm, and her epitaph described her as “pious and merciful.” Although snuff boxes in the form of envelopes are sometimes considered as flirtatious souvenirs, the piece addressed to Turchaninova was perhaps an expression of another sort of appreciation considering her righteous reputation.