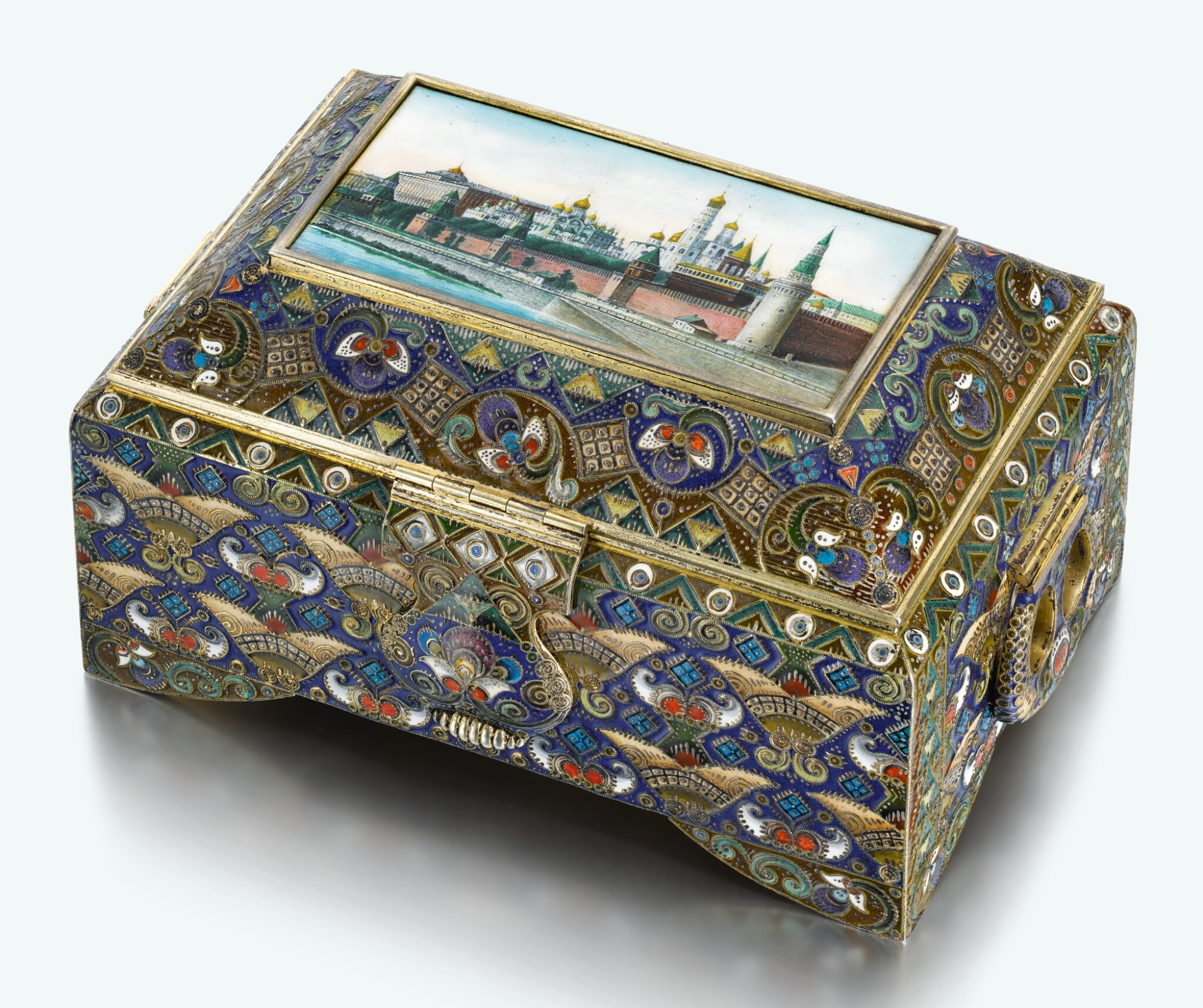 the lid with a raised panel painted en plein with a view of the Moscow Kremlin, the body with subtly shaded polychrome enamel geometric and foliate motifs on green, blue and brown grounds with cloison coils, the lid interior inscribed in Russian 'In memory [of] / A. A. Ignatiyev and R. R. Roggen / 1913-1917 / "Alle Neun" 25 March 1914 from F. T. Ts.', struck on the bottom with maker's initials, 88 standard

Overall in good condition. There are no visible chips or scratches. The body overall with several areas of professional enamel restoration in areas of vulnerability, only visible under UV light, making up approximately 5-10% of the cloisonné decoration. The pictorial panel in excellent condition, with only very minor surface wear, consistent with age.

n response to your inquiry, we are pleased to provide you with a general report of the condition of the property described above. Since we are not professional conservators or restorers, we urge you to consult with a restorer or conservator of your choice who will be better able to provide a detailed, professional report. Prospective buyers should inspect each lot to satisfy themselves as to condition and must understand that any statement made by Sotheby's is merely a subjective, qualified opinion. Prospective buyers should also refer to any Important Notices regarding this sale, which are printed in the Sale Catalogue.

The present casket is decorated with Feodor Rückert’s most iconic view: that of the white Kremlin from the Moskva River.

In the quality of its en plein enamelling it relates most closely to a box in the Royal Collection, London also by Rückert depicting the same view. The Royal Collection example was acquired by Maria, Duchess of Saxe-Coburg-Gotha and given to King George V by her daughter in 1902 (C. de Guitaut, Royal Fabergé, London, 2011, pp. 150-151, n. 182). Another important example decorated with the white Kremlin is in the collection of the Link of Times Foundation at the Fabergé Museum, St Petersburg (V. Voronchenko et. al., Fabergé Treasures of Imperial Russia, Fabergé Museum, St Petersburg, 2017, p. 266 illustrated).

The impressive size and overall construction of this casket relates it closely to other known examples, decorated with important views such as Bogatyrs, after Vasnetsov and Boyars’ Wedding Feast after Makovsky (V. Voronchenko et. al., op. cit., p. 256 and p. 259 respectively).

The inscription on the interior of the lid of this important casket refers to Alexei Alexeevich Ignatiyev (1877-1954), who served as a Major General of the Russian Empire and a Lieutenant General of Soviet Russia. Ignatiyev participated in the Russian-Japanese war and, in 1912, was sent as a military agent to Paris where he supervised the supply of weapons from France to Russia and was in control of the Imperial budget abroad.

Acting as the agent for Belgian and German munitians in Moscow, Rudolf Rudimirovich Roggen was an importer of firearms and hunter’s supplies to Russia. He kept a gun shop at Dom Depre, 11 Neglinny Proyezd, Moscow and was a member of Moscow Emperor Alexander II Hunters society.