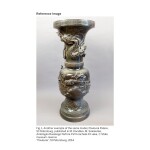 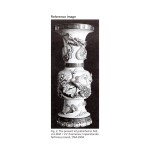 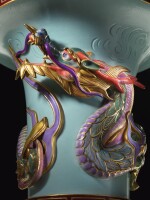 in chinoiserie taste, the body shape reminiscent of traditional gu form, the sky blue grounds applied with boldly moulded and gilt peacocks, flower branches and a dragon in pastel shades, the neck and base with a Greek key pattern in crimson red and gold, with modeller's signature for Anatoli Lukin

Overall in good condition and of good appearance. The vase is constructed in two sections. The rim of the neck with a small repainted chip, approximately 7 by 5mm. The main body in very good condition. As expected, the protruding decoration with scattered small chips to edges and details, including the plumage on head of the birds, the dragon's teeth, horn and claws. The green and pink birds of paradise with lines running through the neck and/or body, probably as a result of a firing flaw. The purple decoration next to the dragon's head with a re-attached tip. With some minor scattered firing flaws throughout.

This brilliantly painted and boldly modelled vase is one of only two known examples, the other of which forms part of the collection at Pavlovsk Palace, St Petersburg (inv. no. цx-10853-I).

Based on an identical image in N.B. von Wolf ‘s seminal book, the present vase was executed during the reign of Emperor Nicholas II for the Imperial palace in Tsarskoe Selo (N.B. von Wolf [ed. V.V. Znamenov], Imperatorskii farforovyi zavod, 1744-1904, St Petersburg, 2008, pp. 638 illustrated). The depth of modelling on the present vase and varied colour palette make it a striking corollary to the more muted example at Pavlovsk (fig.1). The design of the Pavlovsk vase is nearly identical and it is recorded as unmarked, dating to the late nineteenth century (M. Korablev, M. Sokolenko, Antologiia Russkogo Farfora XVIII-nachala XX veka, vol. 4, part 2, Moscow, 2014, pp. 150-151).

Both vases draw on eclectic influences from Oriental culture, which have been creatively re-imagined by the artists of the Imperial Porcelain Factory. The style is completely unique in its translation of oriental subject matter - fantastic creatures, exotic birds and plants - and palette into a boldly Russian aesthetic. Asian decorative arts were a common source of inspiration at the turn of the twentieth century and other related vases by factory artists are known, including one from the period of Alexander III, of the same form and decorated with an identical peacock, in the collection of the Yelaginoostrovskiy Palace-Museum, St Petersburg (M. Korablev, M. Sokolenko, op. cit., pp. 144-149) and another sold Sotheby’s Paris, 26 June 2019, lot 6.

The present vase is remarkable for the depth and skillfulness of its modelling by Anatoli Mikhailovitch Lukin. In his hands, details like the head of the dragon and wings of the peacocks appear to have gained an even greater level of dimensionality from the similar Pavlovsk example.

Anatoli Mikhailovitch Lukin was a sculptor-moulder at the Imperial Porcelain Factory from 1876 until after the 1917 Revolution. During his time at the factory, Anatoli Lukin executed models by P. Kamensky, including statuettes from the Peoples of Russia series, A. Spiess, A. Timus, A. Werner and A. Adamson. He is also known to have produced his own original models. He is best known for his 1914 statuette of the ballet dancer T. Karsavina after a model by S. Sudbinin.