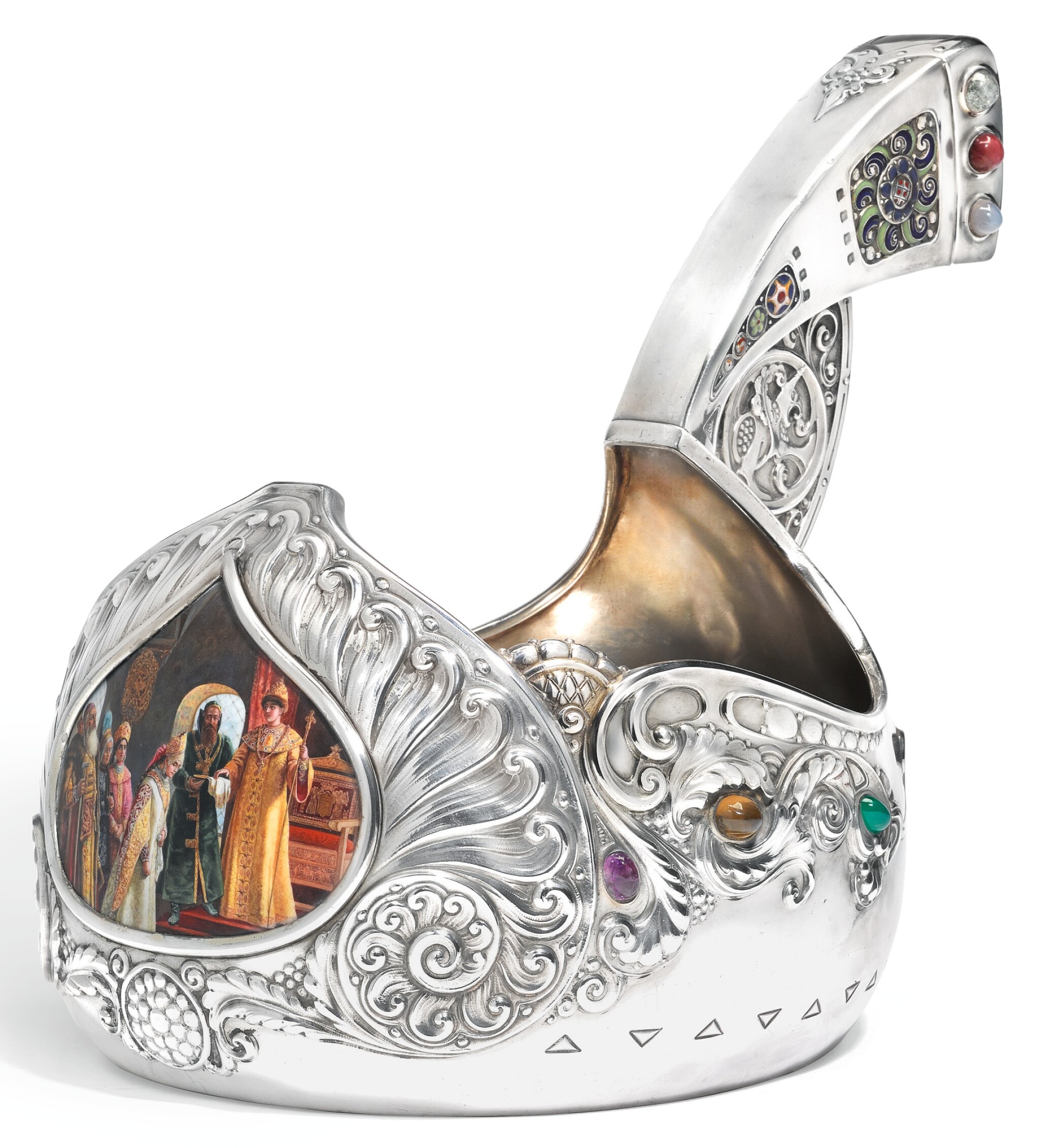 the prow inset with a shaped panel painted en plein with a detail view of The Choosing of the Bride by Konstantin Makovsky (1886), flanked by repoussé stylized flowers and scrolling foliage, the high shaped handle with panels of enamelled flowers, further repoussé and chased with stylized Slavic griffons, inset overall with coloured cabochons, struck with maker's initials, partial 84 standard mark

The central panel in good condition, with only three tiny spots of paint blistering, the body possibly originally gilt, with small areas of gilding remaining. The silver body in very good condition, with some minor dents, scratched and time wear. The top half of the handle very slightly loose; the top handle surface with a further few very minor dents.

The monumental size, masterfully executed pictorial enamel and impressive silverwork that frames it, make the present kovsh one of the most significant known examples from the workshop of Egor Cheryatov. Frequently commissioned by Fabergé and Lorie, Cheryatov was an early twentieth century master of the Russian Art Nouveau and the en plein enamels incorporated in his works are of the highest quality, like those of Rückert and Ovchinnikov.

The impressive size and quality of execution suggests that the present kovsh was probably commissioned or intended for the wealthy merchant classes. The use of The Choosing of the Bride by Konstantin Makovsky relates it to several important enamels from the period. For a related en plein depiction of the scene by Rückert, please see V. Voronchenko et. al., Fabergé Treasures of Imperial Russia, Fabergé Museum, St Petersburg, New York, 2017, p. 258.

Makovsky’s evocative, large scale paintings depicting old Boyar society perfectly encapsulated the patriotic nostalgia expressed throughout the Russian Empire at the turn of the century. Makovsky’s works were favoured by enamel artists not only for their ‘Russianess’ but also for their striking colours. Cheryatov’s characteristic setting of these richly enamelled scenes in related silver surrounds emphasises their quality as jewel-like ‘miniatures’, with an emphasis on the quality of rendering rather than incorporation into a larger decorative enamel scheme.