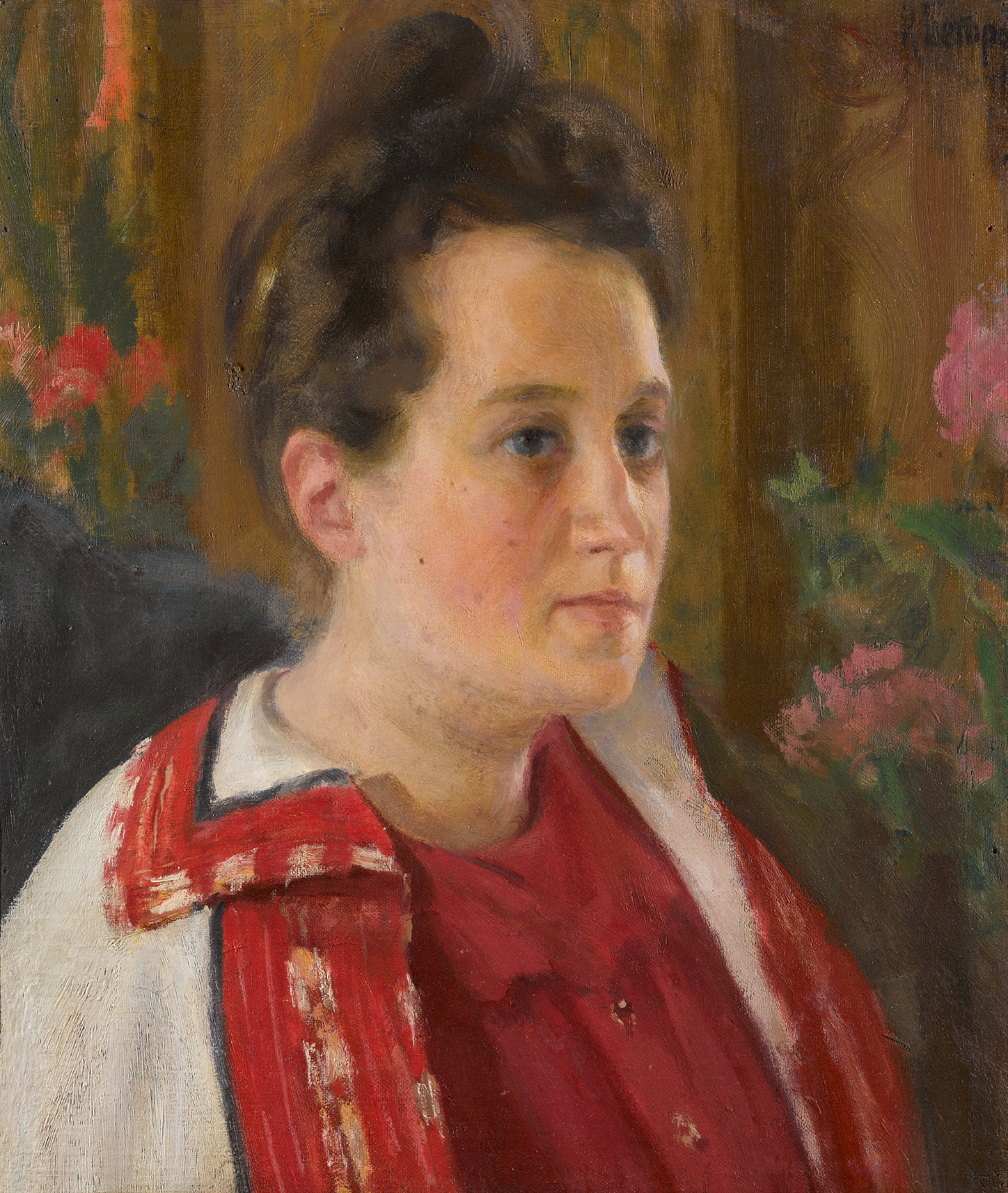 Original canvas. The painting has recently been restretched and the original tacking edges are missing. Several pinholes are visible to places at the edges and corners as well as in the upper left quadrant. There are several spots of retouching to the sitter's cheek which are visible to the naked eye. Inspection under UV light reveals the aforementioned areas of retouching as well as restoration to the canvas edges as well as other scattered spots throughout the composition.

Collection of the artist's widow

Acquired by the present owners before 1970

This early portrait by Petrov-Vodkin from 1900 depicts his patron Yulia Ivanovna Kazarina. Thanks to her generosity, from 1895, for at least ten years Petrov-Vodkin received an artistic education both in Russia and abroad. The artist painted this portrait on holiday in Khvalynsk, where Kazarina owned one of the quays had a grain trading business.

The portrait was a tribute to the artist's teacher Valentin Serov and an attempt to move away from dull, dark paints towards light and colour. It was not a commission but an exercise for the artist who set himself the task of painting a figure en plein air.

It was important for Petrov-Vodkin to show some of the melancholic side of Kazarina, as well as her simplicity and humility, which he expresses by the look in her dark blue eyes. Her figure is dramatically lit from behind and the right, the artist surrounds her with a halo of light plunging the background into olive-brown shadow. The affection of the artist for his model is obvious; his appreciation of her intellect, her education and, most importantly, the absence of any pretensions. Although small, the portrait of Kazarina feels monumental, hinting at the master’s future portraits – the same bust-length portraits with large heads brought towards the viewer.

In a letter to his mother dated 16th February, after Kazarina’s early death in 1912, Petrov-Vodkin wrote: 'I have the fondest and purest memories of this wonderful woman and person who played a huge role in my upbringing. She was perhaps the only woman whom I respected with all my heart from the day I met her until her death. I have never said or thought one bad word against her.'

We are grateful to Valentina Borodina, director of the Art-Memorial Museum of K.S.Petrov-Vodkin, for providing this catalogue note.